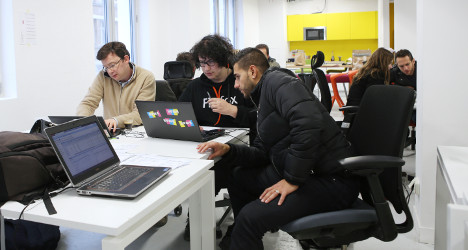 The Silicon Sentier association – named after the Sentier neighbourhood of Paris’ 2nd arrondissement – is set to launch a new start-hub on Thursday.

Numa, as the 1,500 sq. metre space on Rue du Caire is known, is the biggest and boldest project so far for the self-styled “2.0 activists” at Silicon Sentier, and should attract up to 45,000 visitors and 600 tech start-ups each year, all looking for their expert advice.

Consolidating their existing projects – Le Camping and La Cantine – Numa will also hope to renew the Sentier neighbourhood with its hive of activity and innovation, as well as pull in international investors for “Made in France” digital start-ups.

“Up until now, the weak point of our association has been attracting investors from around the world,” American Adrien Schmidt, who heads Silicon Sentier, told Le Parisien on Thursday, explaining that the name "Numa" was a conflation of "numerique" (digital) and "humain" (human).

Numa, however, intends to change that, with developments including a cutting edge videoconference room provided by French telecoms giant Orange, and a video production studio provided by Google.

The new hub was set up with support – financial and otherwise – from the city of Paris, the surrounding Ile-de-France region, as well as from private-sector players like energy giant EDF, French bank BNP Paribas, Orange, Google and American office furniture makers Steelcase.

Numa’s launch party in Paris on Thursday evening comes at a time of ongoing stagnation in the French economy, and faltering advances in home-grown entrepreneurship, despite the efforts of Industrial Renewal minister Arnaud Montebourg to promote “Made in France” businesses and products.

He, along with the Silicon Sentier collective, will be hoping that Numa can turn the goal it states on its website into a raft of investment and new jobs.

“Together we open Numa, and declare our ambition to fly the flag of French innovation even higher, and together, we’re doing our bit for economic growth,” says the group.

There was more optimism in September, when the city of Paris officially announced the launch of the “1000 Startups” project.

“Starting in 2016, the Halle Freyssinet, an old shipping and freight center in Paris 13th arrondissement…will be completely transformed into a massive tech incubator with 30,000m² of co-working and office space, accelerators, incubators, event facilities, and other services focusing on the tech community,” said French start-up blog Rude Baguette.

That would make the French capital no less than the world’s biggest digital innovation hub.