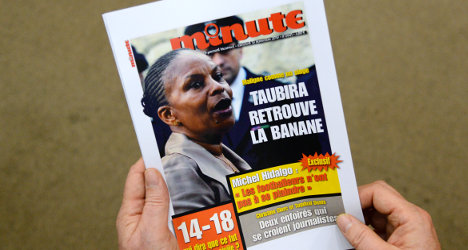 Taubira spoke out on Wednesday after a far-right magazine sparked uproar among politicians both on the Left and the Right by depicting her as a monkey on its front cover.

The magazine Minute went on sale on Wednesday with a cover featuring a picture of Taubira with a headline that read: “Crafty as a monkey” and “Taubira gets her banana back”.

The provocative cover page was an obvious reference to two other recent cases of Taubira being publicly likened to a monkey.

Speaking to French media Taubira described the pain the magazine cover had caused her family.

“I can take the shock, but it is vicious for my children and my family. These words suggest I don’t belong to the family of humans and deny my membership in the human race.

“Justice must respond but also our society has to ask itself questions.

The series of incidents have triggered much soul-searching among liberal commentators over a perceived surge in intolerance.

Taubira warned last week that the country's social cohesion was under threat from a disintegration of long-standing taboos on the expression of overtly racist ideas.

When asked about the trivialisation of racist words and remarks Taubira said: “We must face this and fight.”

Prime Minister Jean-Marc Ayrault registered a formal complaint with the Paris prosecutor over the contents of the magazine.

The move triggered the opening of a preliminary investigation but, in light of France's strong tradition of freedom of expression, legal experts indicated there was little the government could do to prevent the 40,000 copies of the magazine that have been printed from reaching the public.

Black community leaders in France have also called for action to halt what they see as a rising tide of racism in the country.

According to Luis-Georges Tin, the chairman of CRAN (Representative Council of Black Associations) the front page of Minute is a sign of the times in France.

“It is an indicator of the strength of racism in our country, but the submerged mart of the iceberg remains discrimination in employment and housing.

“How many bananas does it take for a real plan against racism to be implemented,” Tin added.

In a front-page editorial, French newspaper Le Monde said there were real reasons for concern over the “abject” attacks on Taubira.

“It shows that the expression of a pure and hard form of racism … far from having disappeared, is, on the contrary, becoming commonplace,” the influential daily said.

“Little by little, dykes have been broken, taboos have been lifted, inhibitions have disappeared.