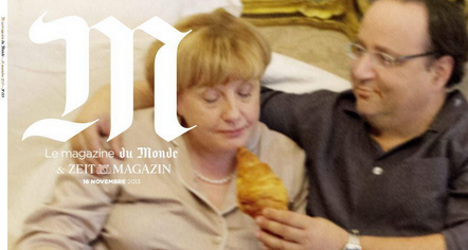 Is this the newest tactic in “hands-on” international relations? Or did someone just become the world’s wealthiest paparazzo? Photo: Screengrab/Twitter/ @lemonde_M

We’ve heard of a “thaw in relations”, but this might be taking things a little too far.

This image, supposedly showing French head of state François Hollande treating his German counterpart Angela Merkel to the finest of French cuisine, has taken the French press by storm on Thursday.

Is this the new face of Franco-German diplomacy? Is François trying to convince Angela of the merits of the French “cultural exception”?

Sadly not. As you may have guessed by now, this image is not the result of a member of the paparazzi achieving the Holy Grail of candid snaps in some Paris or Berlin hotel, but a pair of lookalikes posing for the cover of this week’s Le Monde magazine.

It’s all part of a series of provocative photos by English artist and lookalike specialist Allison Jackson to promote a joint feature on trans-Rhine relations by French daily Le Monde and German newspaper Die Zeit.

Here’s the “breakfast summit” in all its glory, on the cover of Friday's “M” – the weekly magazine of Le Monde.

The headline is: “France-Germany. I love you (me neither)” a reference to the infamously saucy Serge Gainsbourg-Jane Birkin duet “Je t’aime (moi non plus).”

For its weekly magazine on Thursday, Die Zeit opted for a steamy mock-up of “Hollande” cradling “Merkel”, who holds a glass of champagne and strikes a coquettish pose in a luxurious fur coat.

This isn’t the first François Hollande lookalike to take France by storm, though.

Back in June, a Spanish priest by the name of Fr. Javier Alonso had the French gasping and laughing when his uncanny resemblance to the French president came to light.

POLITICS
Macron and Merkel in talks over European defence and US relations
Url copied to clipboard!