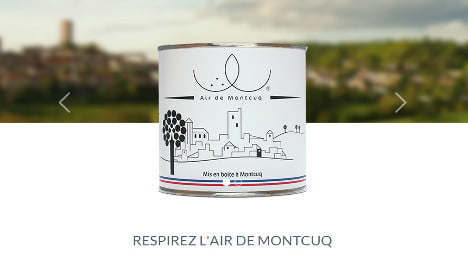 A tin of fresh air from the French village of Montcuq anyone? Photo: screengrab www.airdemontcuq.fr

It all began as a bit of a joke.

In the summer 22-year-old student Antoine Deblay decided to have a crack at selling fresh air from his village of Montcuq in the Lot region of southern France, just for a bit of laugh.

Of course the “Air de Montcuq” is no ordinary air. It's not that it has some unique healing powers, in fact quite the opposite, normally no one would ever want to buy “Air de Montcuq”.

It is unique simply thanks to a play on words in French, which means the village is often pronounced as “mon cul”, allbeit incorrectly, which means “my ass”. (In local dialect the q is pronounced so Montcuq is said as (mon cuk).

So when Deblay put an advert on the crowdfunding site “KissKissbankbank” asking for investment to help him sell “Air of Montcuq”, which could translate as “wind from my ass“, he thought it would just be laughed off.

But clearly the wind was in his favour and to his surprise he quickly raised the €800 he had asked for, meaning he could go ahead with his project.

“I just wanted to sell fresh air just to see if it could really work,” he told The Local on Wednesday. “I was totally surprised. I never thought it would work.”

With €800 he had enough money to buy the metal tins, pay for the printing of the labels and launch the website www.airdemontcuq.fr

Deblay priced a tin of 250ml of fresh Montcuq air at €5 apiece, promising that it was “100 percent organic” and “handmade”. He quickly received orders from around 70 good-humoured customers.

He also said that in order not to take all of Montcuq’s fresh air, he would only sell a maximum of 10 litres of it each week.

However Deblay may have to up his limits after news of his success hit the French media this week.

“Since Tuesday it has gone crazy and I have received over 100 orders in a couple of days. There is obviously a bit of a buzz about it, but I am still surprised,” he said.

The entrepreneur says he is working on other ideas, but was not willing to divulge them. But if he can sell fresh air, you would not bank against his other air-brained ideas succeeding.

Montcuq is not the only funny village name in France. Check out this list of ten others below.