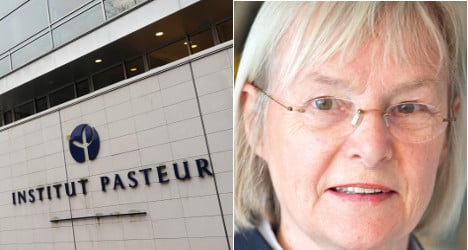 Everyone likes to have their hard work acknowledged and Scottish-born biologist Margaret Buckingham will experience just that at the Sorbonne University in Paris on Thursday when she picks up a prestigious French science gong.

Buckingham, 68, a professor emeritus at the famous Pasteur Institute in Paris was awarded the gold medal from the National Centre for Scientific Research (CNRS) for her pioneering work in gene regulation. The award has in the past singled out several scientists who later went on to win Nobel prizes.

Oxford-educated, Buckingham has been working in France since 1971, was given the prize for her research into how genes drive the development of muscle and heart tissue.

Her achievements include the CNRS's silver medal, awarded in 1999, and election to the Academy of Sciences in France, Britain and the United States.

Here she tells The Local about how France gave her an opportunity to succeed as a scientist and a professional woman in a man's world.

Did you expect to win the award?

Absolutely not. It never crossed my mind. I was on the Eurostar going to London when my mobile phone rang. I heard this voice in French talking to me and I thought what have I done and the train went into the tunnel and the voice cut off. I had heard about the gold medal before, but I never thought for one moment that it would ever concern me. I have been absolutely overwhelmed and have had too many interviews with journalists!

How did you end up working France?

I went to Oxford where I read biochemistry and it was quite common for people doing PHDs to go abroad to study and work in a new lab. I was keen to go to France as I was also interested in art and being brought in up Scotland, the Scots and the French always had a common enemy in the English…

And how did you end up at the Pasteur Institute?

I wrote to the scientist who was leading a study on the Messenger RNA group of molecules, which were first discovered in France and he agreed to take me on. I worked with him and helped develop my own little group. It was very exciting at the time. I thought about going to the US but kept putting it off and I am still here 40 years later. I was always happy in Paris and it’s always been interesting.

How was it settling in?

I wasn’t fluent in French but the language of the lab is very often in English, but for living here it was important to be fluent. That is the challenge. It took me two years. I still speak with a British accent but people understand me.

People come from all over the world to come here to study post-doctorates. It’s a prestigious place to do research and people come here because they really want to come. It’s also got the advantage of being in Paris. Here and the Institut Curie are among the best places to be in the world. The people are looked after and the level of teaching is very good.

What have been the benefits of living in France?

The great thing about France is that the best schools and universities are free. The Republican attitude that education should be available to everyone is very good. The problem is the universities are often very disorganized because there are so many students enrolled, because they don’t select them. As long as you have the Baccalaureate you can go, you don’t need to have high grades..

I am very grateful that France, Paris and the Institut Pasteur really gave me the opportunities which made it possible for me to do what I wanted to do. That freedom was very important. It doesn’t exist in every country.

France is a country that encourages professional women. In some countries if you are a woman they would say your place is in the home, but France does not have that attitude. The fact they have the Écoles Maternelles (Nursery Schools) here, where every child has the right to go to school from three or four years old, makes it easier for women to have a career. I have never encountered any sexism in academia here. Most people involved in labs were men, but that is evolving and there are many more young women taking on their own laboratories now. Things are heading in the right way.