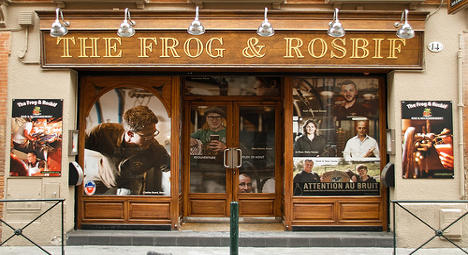 Traditional pubs are the favoured hangout of many expats, but that's not because they are "lazy and scared" of integrating with the locals, argues one reader. Photo: Jamiecat/Flickr

On Friday The Local published the views of Paris-based Englishman Neil Kreeger, who moved to France five years ago. He told The Local that he would be perfectly happy to only have French friends, because they are 'more civilized, more grown up and classier' and also why expats who don’t try to integrate are "lazy and scared".

As you can imagine, there has been a strong reaction to Kreeger's views, from readers of all nationalities, some of whom sympathize with his comments, and others who disagree.

Here's a selection of what some of you had to say:

"The little expat community has been great for my family. As my French husband and I don't speak English together at home, I was keen for the children to hear and speak English with other native speakers, not just mum.

My fully bilingual children have now outgrown the group and I don't really participate any more, but my kids and I don't regret it for a moment. It wasn't excessive – not a drop of beer in sight – but a little touch of home, as well as an insight into their "other" culture, for my children.”  Comment by Yvonne Flavin via Facebook.

"If you're running away from home, then by all means, disassociate yourself and cut your ties. If you're expatriating to another country, then do your best to assimilate and learn.

The beauty of expatriation is the cross-pollination that occurs. To look at it as though it's a binary choice, where you must choose one experience over the other, is to fully miss out on the very best part about expatriation.

"My French friends and acquaintances (hopefully) see me as an American who understands them. I value them for welcoming an American into their lives and enjoy sharing that with them as I learn from them.

“Those who do not integrate may find the language difficult and more of a barrier over a long time period. Hence the security of expat clubs etc. It's not necessarily because they are lazy and don't like France. The ones that don't like France usually go back to Blighty, sooner or later.” Comment posted by GreggF.

“Apart from Brits, there are other expats from different nationalities for whom it might not be very obvious integrating with the French in spite of their good French (for obvious differences)! I wouldn't call those expats lazy and scared. Their French counterparts have an equal contribution in not involving themselves!” Comment posted by ANexpat.

“It is very unfortunate that expats end up making their small communities in any country. Most of them would love to hang out with locals. But as Kreeger puts it they are either lazy or scared. Or in my opinion, many of them do not even want to hang out.

When that expat's community is formed, it gets more and more difficult to get out. And if those in the community are all from the same country, it becomes almost impossible. I have a Dutch friend who once went to a French party in Stockholm. And you may figure out the rest – he got out after 20 minutes. No one spoke a word to him! Not a soul. And when it comes to the French, Italian and the Spanish, it’s even worse because of language inabilities. They cannot communicate in English well (not all) and so they resort to their cocoons even faster.” Comment posted by Gxhxoxsxtxfxm.

"I've noticed that the 'worst' for integrating are those in couples. Understandable in many ways, they speak English between themselves which precludes them from having to learn French in many ways. But few make a real effort, Sky TV, a copy of yesterday's Daily Mail from the local papeterie (at €3.50 a pop!), lunch with their only friends, other English speakers.

I think it is rather sad for they are missing almost everything about the culture that surrounds them.” Comment posted by Frogbloke.

@TheLocalFrance I moved to Paris with support from core French friends. Nonetheless I never choose friends by nationality, but people I like