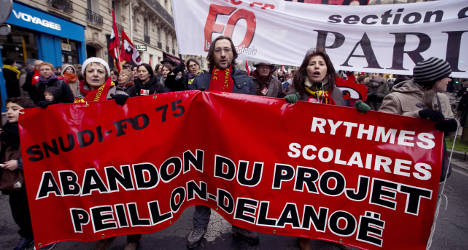 Another flagship reform by France’s ruling socialists is set to provoke unrest this week, with schools being the latest battleground for a show of dissent against the government of President François Hollande.

Staff at schools across the country are to take industrial action over the next three days in a show of opposition against Education Minister Vincent Peillon’s reform of the primary school week.

Peillon angered many in the teaching profession earlier this year by proposing to extend the school timetable by half a day each week from September 2013. The reform meant France’s primary schools would no longer close on Wednesdays with children attending classes for extra-curricular activities. In return the length of the full teaching day was slightly shortened.

However teachers protested that the extra half day will simply add to their already overburdened workload and is being rushed through before members of staff can be recruited.

Although the reform was due to come into force last September, many regions in France decided to delay its implementation until September 2014.

Despite the reform being passed by parliament many school staff and local authorities are still not happy.

On Tuesday staff at Paris primary schools who teach extra-curricular activities, called “animateurs” were called to strike by their unions, who are demanding the “appropriate means” for them to do their jobs. Around 520 schools were affected by the walk-out.

On Thursday it will be the turn of teachers to take action, when schools will either be forced to close or take measures to make up for staff shortages. Unions expect 150 schools to remain shut.

France’s largest teaching union SNUipp-FSU wants the reform to be dropped and round table talks to take place immediately to try to resolve the dispute.

Parents groups are also protesting against the reforms and have issued calls through social media that mums and dads keep their children out of school on Wednesday and block the entrance to institutions.

But not all parents agree with the action.

Tim Clark, from the Alpes Maritimes department, who has two children at a local primary school told The Local: "The reaction to this week's call to action in our local area has been one of frustration. The school is wanting parents to actually 'boycott' school tomorrow and then the teachers are on strike on Thursday. We have read that studies have been carried out to prove that five shorter days is far more beneficial to children's well being and the long day currently experienced by my 3 year old is hard work for her."

@TheLocalFrance as a parent in France I can assure you very few parents support the strike and most support the 5 day week.

Local authorities are also rebelling against Peillon, with around 50 right-wing mayors saying they will refuse to implement the reform in September 2014.

The mayors claim the “financial impact” of the changes in timetables will not be manageable, according to a report in Le Figaro.

In a bid to calm protests the government released a report that claimed there have been no major issues in 93.5 percent of the communes where the reform has already been introduced.

“There are still problems,” conceded Peillon, "but these figures go against the idea being put forward that there has been a disaster."

Discontent over Peillon’s reform has rumbled on for months, with the minister failing to convince many in the profession that the changes are necessary.

“We need to inform the French people that one week of 4.5 days is better for learning than 4 days of more than five hours of classes,” the education minister told Le Parisien at the time. “It will allow children to undertake more sporting and cultural activities.