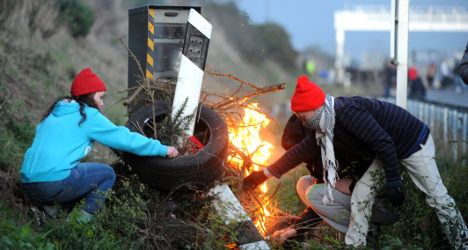 Members of the "Bonnets Rouges" (red hat) movement protest against a planned ecotax by setting fire to a roadside speed radar in Brittany. Photo: Jean-François Monier/AFP

France’s government lurched towards a crisis on Tuesday, amid what one union leader dubbed an “explosive” atmosphere in the country, as President Hollande – less popular than ever in the polls – faces a tax revolt in Brittany and protests by teachers and self-employed tradespeople.

The rebellious mood in the country was captured in various newspaper headlines on Tuesday.

Regional newspaper Midi Libre said France was a country "on the brink of a social explosion."

On top of the revolt in Brittany, schools across France were braced for strikes and protests this week by teachers, staff and parents unhappy with government changes to the primary school timetable.

France's Professional Union of Artisans, which represents small businesses and traders ranging from bakers to plumbers and market stallholders, will also launch a wave of protests from Wednesday. Jean-Pierre Crouzet, the head of the union, said his members were being "asphyxiated" by new taxes, estimated at €1.1 billion ($1.4 billion) this year.

The government has announced about €3 billion in tax increases for next year to rein in its budget deficit following pressure from Brussels.

A government with 'no more authority over anything'

The Breton Rebellion has involved clashes with riot police, the forced occupation of government offices, and continued destruction of roadside equipment.

On Monday night, members of the “Bonnets Rouges” movement – named after a 17th century tax uprising – set fire to two more speed radars in Brittany, bringing to 48 the number destroyed in November alone.

The destruction of the equipment, which comes after five metal toll gates were vandalised, marks a new escalation in fierce opposition to the “ecotax” – a new levy on road transportation that would hit the western region’s agrifood industry particularly hard.

The measure was suspended on October 29th by Prime Minister Jean-Marc Ayrault, after thousands of protestors wearing clashed with riot police during a protest at Pont-de-Buis.

Ayrault, however, who said after the announcement that he wanted to take some time for “listening and understanding” between his government and the protestors, appears to have fallen between two stools with the policy U-Turn.

On the one hand, the Socialists' Green party coalition partners have condemned the suspension of the ecotax, which had been intended to incentivise shorter haulage journeys and minimize carbon emissions.

"If the government climbs down on the ecotax it will have no more authority over anything,”  Green party senator, Jean-Vincent Placé had warned before Ayrault’s climbdown.

On the other hand, leaders of the "Bonnets Rouges" movement slammed the suspension of the tax as insufficient, and demanded its full and immediate scrapping.

A 'loss of trust' and an 'exponential crisis'

Reacting to these crises, Socialist MP Malek Boutih broke party ranks in spectacular style on Tuesday, publically calling on Hollande to sack Ayrault, in order to “re-establish dialogue with the French people.”

“We’re in an exponential crisis. Every event feeds the next crisis,” he told Le Parisien.

“The government seems to be deaf, and at the same time, unheard. Dialogue with the country has been broken. Arguments, explanations, discourse – nothing is working anymore with the French people,” he added.

Boutih’s analysis was borne out over the weekend by a new poll which showed the French public was less satisfied than ever (22 percent) with Hollande’s performance as president.

His predecessor Nicolas Sarkozy, by contrast, had a 44-percent approval at the same juncture (16 months) of his presidency.

Indeed, not even the solemn occasion of Armistice Day commemorations on Monday could save Hollande from the wrath of a small group of protestors –some wearing the emblematic red hats of the Breton anti-tax movement – who booed the president’s car as it passed along the Champs Elysées.

The protests have been almost universally condemned as inappropriately timed, but are a sign, no less, of the level of anger held by the French public against the current government.

Fully two-thirds of the French public want to see a cabinet reshuffle, and even 53 percent of Hollande’s left-wing base are of the same view, according to the OpinionWay survey.

Among them, Socialist candidate for Mayor of Paris Anne Hidalgo, who on Sunday joined the chorus of those calling for a major shake-up within the government.

Among those tipped as possible replacements for Ayrault are Martine Aubry, the Socialist mayor of Lille who was due to have lunch with Hollande on Tuesday, and Manuel Valls, the popular interior minister who has been keeping a conspicuously low profile over recent weeks.

For her part, far-right National Front Leader Marine Le Pen on Tuesday called for no less than the dissolution of parliament and new elections as soon as possible.

“When you have a loss of trust [as bad as this one] between the people and the president, you absolutely have to go back to the polling booth,” she told iTele.