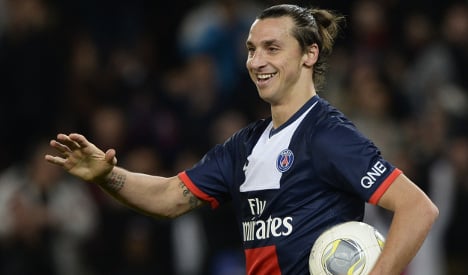 Ibrahimovic gave the defending champions the lead shortly before the interval before adding a penalty early in the second period and then completing his hat-trick after Nemanja Pejcinovic had pulled a goal back for the visitors.

The result moves PSG provisionally five points clear of both Lille and a faltering Monaco side at the top of the table, although Lille have the chance to narrow that gap when they face Guingamp later.

But if anyone is to prevent PSG from retaining their title, they will have to end the capital side's remarkable run of not having lost over 90 minutes in 33 games since the start of March.

"The team controlled the match well and created a good few chances in the first half especially," said PSG coach Laurent Blanc.

"Both teams tried to play football despite difficult conditions, and that made it an open, enjoyable game with plenty of goals."

Blanc made changes to the team that was held by Anderlecht in the Champions League in midweek, with Thiago Silva wearing the captain's armband in his first start since suffering a thigh injury at the end of September and Javier Pastore also returning after a spell on the sidelines due to injury and loss of form.

And against a mid-table Nice side who had lost three of their last four games, the hosts dominated proceedings, although only after Dario Cvitanich had come within inches of converting a Christian Bruls cross at the other end early on.

Making his Ligue 1 debut in the Nice goal in the absence of injured Colombian international David Ospina, Luca Veronese needed to be alert to prevent a Maxwell cross from sneaking in under his bar, and he later came off his line to deny Ibrahimovic.

On a heavy, rain-sodden pitch, PSG were also frustrated by the offside flag, with both Edinson Cavani and Ibrahimovic having goals ruled out, much to the displeasure of the home support.

But the pressure told six minutes before half-time, Gregory Van der Wiel crossing to the back post and Ibrahimovic converting.

The impressive Bruls fired just wide for Nice at the start of the second period but their chances of taking anything from the match were effectively ended when PSG won a penalty 56 minutes in.

Cavani was brought down by the exposed Veronese inside the area, and while the young 'keeper would have been relieved to have been shown only a yellow card for his troubles, there was nothing he could do about Ibrahimovic's penalty.

Nice were given hope 20 minutes from time when Nemanja Pejcinovic tapped a Bruls cross into an empty net, but that hope lasted five minutes until Lucas — just on as a substitute — crossed for Ibrahimovic to head in and complete his hat-trick.

It was the Swede's eighth Ligue 1 goal of the campaign and his 13th in his last seven matches for the club in all competitions, strengthening his case in the vote for this year's FIFA Ballon d'Or award.

"If Ibra can be one of the contenders along with (Cristiano) Ronaldo, (Franck) Ribery and (Lionel) Messi, I'd be happy," admitted Blanc. "He has scored some spectacular goals, but in terms of what Ribery has won you can't do better."

Monaco's recent downturn in form continued when they were held to a 1-1 draw at home by Evian on Friday despite Radamel Falcao scoring his ninth goal of the campaign.

The Colombian's clinical strike cancelled out a Daniel Wass opener but Claudio Ranieri's team were lucky to come away with a draw and have now taken just one point from the last six available.

On Sunday, Nantes will aim to continue their good start to the season away to Bordeaux before Marseille look to end a run of seven matches without a win when they host Sochaux and Saint-Etienne welcome Lyon in the Rhone derby, one of the French game's most passionate fixtures.