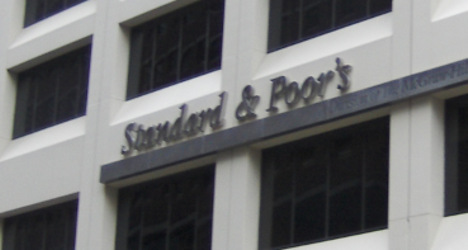 The French government reacted angrily on Thursday to a decision by Standard and Poor's agency to downgrade France's credit rating by one notch to "AA". Photo: B64/Wikimedia

The Standard and Poor's ratings agency on Friday downgraded France's credit rating by one notch to "AA," with outlook stable.

The agency said it was cutting the rating from the previous "AA+" because government reforms would not raise medium term prospects and because lower economic growth was constraining the government's ability to consolidate public finances.

"We believe the French government's reforms to taxation, as well as to product, services and labour markets, will not substantially raise France's medium-term growth prospects and that ongoing high unemployment is weakening support for further significant fiscal and structural policy measures," the agency said.

"Moreover, we see France's fiscal flexibility as constrained by successive governments' moves to increase already-high tax levels, and what we see as the government's inability to significantly reduce total government spending," it said.

S&P said it expected net general government debt to peak at 86 percent of gross domestic product (GDP) in 2015 and unemployment to remain above 10 percent until 2016.

The stable outlook means there is a less than a one-in-three chance that the agency would change France's rating over the next two years.

French Finance Minister Pierre Moscovici in a statement deplored "the critical and inexact judgements" made by the agency.

And Prime Minister Jean-Marc Ayrault said that "France's ratings remains among the best in the world" and that the agency "does not take into account all the reforms" made by the government. 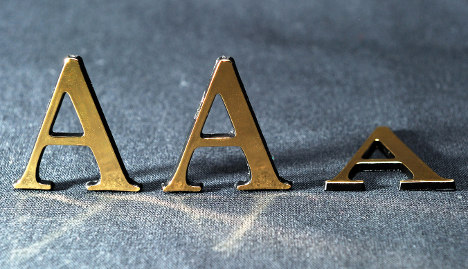 "The affirmation of France's 'AAA' status is underpinned by its wealthy and diversified economy, stable political, civil and social institutions and its exceptional financing flexibility reflecting its status as a large benchmark eurozone sovereign issuer," it said in a statement.

France has been downgraded by the other two major credit ratings agencies, Moody's, and Standard and Poor's, from their top ratings to "Aa1" and "AA+" respectively, both with negative outlooks.

Future ratings will depend on the pace and scale of economic reforms in the country, in particular reforms to the labour market.

"The prospective reform of the labour market will be a key indicator of the political and public support for substantive measures that would enhance competitiveness and the growth potential of the French economy necessary to underpin confidence in the long-run sustainability of public finances."

One of France's weaknesses in terms of its credit profile is its level of public debt, which Fitch estimates will stand at a whopping 90 percent of gross domestic product (GDP) by the end of 2012, compared with the current median of 53 percent for other AAA-rated countries.

Out of AAA peers, only the United States and Britain are more indebted, while that of Germany, the next most indebted AAA country, is at 82 percent and due to decline from next year.

The agency said it would watch for the government to meet "its deficit and debt targets and implement structural fiscal measures that provide confidence that public debt will be on firm downward path from 2014".

Fitch's confirmation of its top rating for France does not come as a surprise, since the agency had already said that it would give the new government led by Prime Minister Jean-Marc Ayrault time to set reforms in place and was unlikely to cut the country's rating this year.