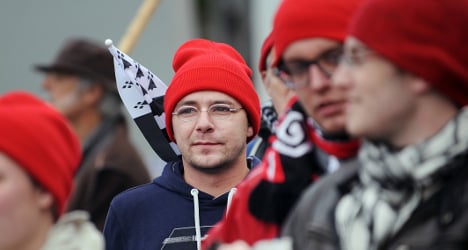 The “Living, working and deciding in Brittany” movement has become famous in France in the last week, as much for their emblematic red hats as for their clashes with riot police and destruction of toll gates, in protest at a planned “ecotax” on transport.

The “Bonnets Rouges” label is a reference to a 17th-century anti-tax revolt in the western region, and has spread to include demonstrations by poultry workers facing redundancy in Finistère, and has led to angry claims that the agrifood-driven economy of the western region is being neglected by the Paris-based socialist government.

For its part, French clothing retailer Armor Lux gained admiration for handing out 900 symbolic red hats to demonstrators for an explosive protest on October 26th.

Jean-Guy Le Floch, CEO of the company, which has its headquarters in the Breton town of Quimper, said this week the donation was “a sign of solidarity and friendship with the protestors.”

However, Le Floch on Thursday admitted that, faced with an additional order of 7,500 wooly caps for the movement, Armor Lux turned not only outside Brittany but outside France to fulfil the demand.

Where did these symbols of economic patriotism originate? Scotland, of all places.

Interviewed by left-leaning daily l’Humanité, who had noticed the hats weren’t in keeping with the usual style of Armor Lux products, Le Floch admitted he had “turned to a Scottish colleague” to supply the hats.

“We added on the Armor Lux label, and they were sold to the movement at a price of four euros each,” said Le Floch.

The CEO did not reveal the identity of the Scottish company, nor where the hats were actually made, disclosing only that they were imported from Scotland.

Contacted by The Local on Friday, a representative from Armor Lux refused to comment.

This isn’t the first time a discrepancy has been revealed between the patriotic message of political movements, and the reality of their economic activities.

During the presidential election campaign, in early 2012, The Local reported how France’s largest political parties had been selling and using campaign materials and souvenirs most definitely not made in France.

Far-right National Front leader Marine Le Pen, for example, had reacted with outrage upon finding that France’s postal services had been using scooters produced in Thailand.

However, an investigation discovered that the National Front’s own t-shirts were made in Bangladesh.

Furthermore, it was revealed that the centre-right UMP then led by incumbent president Nicolas Sarkozy, had been selling promotional mugs and ashtrays proudly bearing the label “Made in France”, but which had in reality been produced in Morocco and China.