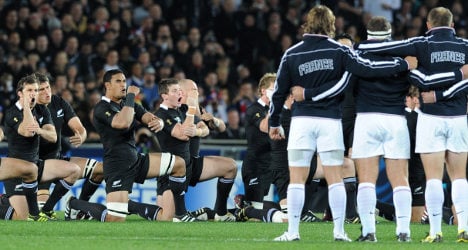 France face down the All Blacks as they perform the Haka ahead of a group match in the 2011 Rugby World Cup. Photo: Gabriel Bouys/AFP

The All Blacks may have beaten Les Bleus three times in a row in home tests in June — including a 30-0 thrashing in Christchurch in the second test — but the former Wales coach says history has taught him never to underestimate the erratic French.

Only two years ago, New Zealand thrashed France in a World Cup group stage match 37-17 but they were left hanging on by their fingernails in a gripping final in Auckland before claiming their second world title with an 8-7 success.

"The first thing you've got to do with France is expect the unexpected," said Hansen.

"Plan for everything and once you've stopped planning for that, try to think outside the square and think about what else they'll chuck at you, because that's the way they are.

"They will turn up definitely with something different from what we got last time.

"But you would imagine they will try and take us on up front initially."

France had mostly been awful in the World Cup, losing 19-14 to Tonga in the group stages while scraping through 9-8 against Wales in the semi-final despite playing 70 minutes with a numerical advantage following Sam Warburton's early red card.

Yet they still bounced back to give the All Blacks a scare in the final.

"They're very unpredictable. You've only got to think back to the 2011 World Cup and everyone wrote them off and expected us to win by heaps (in the final), and they came out and played probably the best game they played all tournament," added Hansen.

"When they're written off, that's when they're at their most dangerous I've found.

"We've got a lot of respect for them, we think they're good athletes, they're good at the core role of the game and they've got the flair when they choose to use it."

There are certain similarities between France's build up to this game and the World Cup final of 2011.

Les Bleus had had an inconsistent year then too, losing to Italy for the first time ever in the Six Nations, although they warmed up for the World Cup with back-to-back home and away wins over Ireland.

This year they have not so much been inconsistent as largely poor.

They again lost in Rome as they finished bottom of the Six Nations for the first time since Italy were admitted to the competition.

They have only one win in eight internationals this year compared to New Zealand's 11 out of 11 tests in 2013 that has seen them retain the southern hemisphere Rugby Championship with a 100 percent record for the second year in a row and complete triple successes over both France and Australia.

They are aiming for their first ever unbeaten calendar year and prop Tony Woodcock admitted it is on the players' minds with matches against England and Ireland to come.

"That's definitely something we want to achieve, it's been mentioned but we know we have to take one day and one game at a time. If we put every amount of focus on that one game, the result will take care of itself," he said.

France coach Philippe Saint-Andre, who has picked a new half-back pairing in Morgan Parra and Remi Tales, admits his players are the underdogs but insisted they would not accept being a New Zealand punchbag.

"They have a huge desire but also fear, which should be positive," he said.

"We respect New Zealand rugby but we want to show that French rugby exists.

"From a mental point of view, the players are ready. Now it's time to stop talking and show some action, and action is done on the pitch."

Previous France vs. New Zealand encounters have brought some of the finest and most dramatic action ever seen on an international rugby pitch, not least the 1999 World Cup semi-final, regarded by many as the greatest match in RWC history.

Relive the best moments with these video highlights.