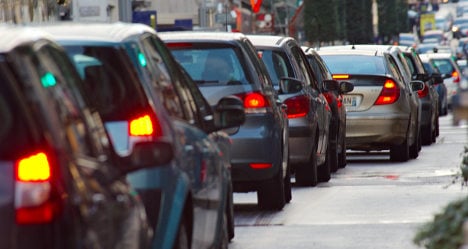 Stuck in traffic? France has some of the most congested roads in the world. Photo: Frederic Bisson

In its global ranking of the world's most congested cities, no fewer than three French cities were featured in the top ten.

Somewhat surprisingly, perhaps, Paris was not ranked as France’s most congested city, although depressingly, the capital did rank ninth in the world.

This year, the dubious "honour" of the French city with the worst traffic, goes to Marseille. Worse still, the country’s second-largest city is the sixth most congested in the world with a congestion level of 40 percent.

Traffic in the city reaches its peak in the evening at 81 percent, and 74 percent in the morning, the study found.

Here are the eight most congested cities in France.

The Traffic Index, which provides a barometer of traffic congestion in 169 cities across six continents, compares travel times during non-congested hours with travel times in peak hours both on local roads and highways.

The most congested city in the world was Moscow, according to the ranking, followed closely by Istanbul.

Here are the world's ten most congested cities.

London, for its part, ranked 14th in the European league table, just above Berlin, with Dublin ranking 23rd out of 59 cities.

Commenting on the findings, TomTom’s Chief Executive Officer, Harold Goddijn said: “We are seeing a clear pattern which shows that congestion levels increase as economies emerge from recession. The traditional responses to tackling congestion, like building new roads or widening existing ones are no longer proving effective.