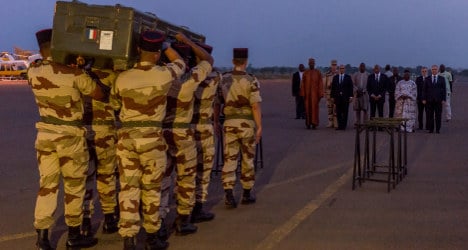 "We're in the process of verifying it, but it seems plausible," French Foreign Minister Laurent Fabius told French television on Thursday, referring to the claim over the murders of Ghislaine Dupont and Claude Verlon in the flashpoint northeastern town of Kidal on Saturday.

Ghislaine Dupont, 57, and Claude Verlon, 55, were kidnapped and shot dead by what French officials called "terrorist groups" after interviewing a spokesman for Tuareg separatists in the flashpoint northeastern town of Kidal on Saturday.

Al-Qaeda in the Islamic Maghreb (AQIM) said in a statement published online by Mauritanian news agency Sahara Medias the killings were "the minimum debt" owed by the French people and President Francois Hollande "in return for their new crusade".

"This operation was a response to crimes committed by France against Malians and the work of African and international forces against the Muslims of Azawad," AQIM said, using the name given by the Tuareg people to northern Mali.

In response, a communications official in the French presidency told AFP the country would "use all its resources to ensure these crimes do not go unpunished, no matter who is responsible."

AQIM said the murders had been carried out by a unit led by Tuareg commander Abdelkrim Targui, who was close to Abdelhamid Abou Zeid, one of AQIM's main leaders in Mali who was killed fighting the French army in northern Mali in late February.

Abou Zeid, who was 46, was credited with having significantly expanded the jihadist group's field of operations to Tunisia and Niger, and for kidnappings across the region.

The claim came a day after the bodies of the Radio France Internationale (RFI) journalists were flown back to Paris, with French and Malian troops intensifying the hunt for their killers.

A French military patrol found Dupont and Verlon's bodies about 12 kilometres (seven miles) east of Kidal, just hours after they were snatched, lying by the pick-up truck in which they had been abducted.

They had been interviewing a spokesman for the main armed separatist group in the region, the National Movement for the Liberation of Azawad.

The killings have shaken France, which just days earlier was celebrating the return of four hostages who had been held for three years after being abducted by AQIM in Mali's neighbour Niger.

'Dozens of arrests made'

A French source said seven investigators, including intelligence and police officials, had been sent to Mali to assist in the investigation.

"An inquiry has been swiftly launched. Operations, searches have taken place and investigations are progressing," Hollande told a cabinet meeting in Paris on Wednesday, according to government spokeswoman Najat Vallaud-Belkacem.

A member of the Malian security forces said on Tuesday that "at least 35" suspects had been arrested over the previous 48 hours in connection with the murders, while a local government source in Kidal put the figure at "a few dozen".