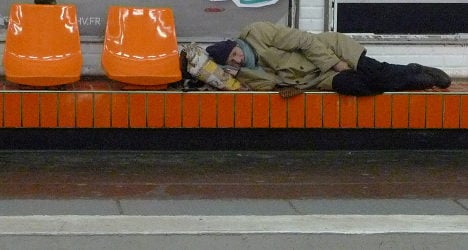 Five homeless people in France have been given smartphones to tweet about their everyday lives, as part of a project to break down prejudices. Photo: Jean-Louis Zimmerman

What’s it really like to live as a homeless person in France?

This was the question organizers were hoping to answer when they launched “Tweet2Rue”, an online project where homeless people were given smartphones and encouraged to post to Twitter about their everyday lives.

Organized by homeless associations in partnership with French radio station France Inter, the six-month project is designed as an act of solidarity towards homeless people and an attempt to break down the prejudices associated with homelessness.

The participants, Nicolas, Sébastien, Patrick, Ryan and Manu, who are aged between 24 and 47 years of age, were each given a smartphone on October 17th.

Since then, the men have attracted thousands of well-wishing followers, sharing daily anecdotes from their lives in 140 characters or less.

Two weeks after its launch, the reaction has been overwhelmingly positive.

On one occasion, Patrick, whose Twitter handle is @kanter57640, tweeted about having problems with his vision and was contacted by an ophthalmologist who invited him to come to his shop to get a pair of glasses.

Other tweets range from anything from comments about the weather to the joy at receiving a new pair of shoes.

In an interview with Le Figaro, Patrick said he decided to participate in the project “more for a laugh than anything else,” without realizing its scope.

However, he added that he did not think that six months would be enough to change the mentalities of French people towards the homeless in France.

Meanwhile, Emmanuel Letourneux, who came up with the idea for the project, said that he hoped that the initiative would attract more participants on a national scale.