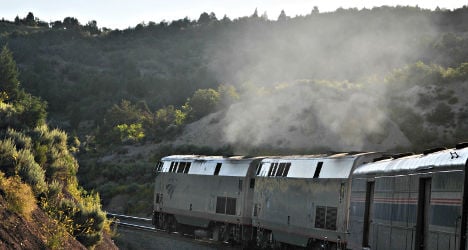 A French tourist, described as "agitated", has jumped to her death off a moving cross-country train in the US state of Iowa. File photo of Amtrak's California Zephyr train: LocoSteve/Flickr

The woman, 31, was clearly "uncomfortable" on the train and made the other passengers nervous as she moved from seat to seat, Montgomery County Sheriff Joe Sampson said.

A conductor came and sat next to her, trying to calm her down and explaining that the train would be stopping in Omaha, Nebraska in just over an hour.

She wouldn't be calmed however, and suddenly jumped up, ran through the carriage and yanked open a door at around 9:50 pm Monday.

"He tried catching up to her and couldn't, and she jumped," Sampson told AFP.

"The poor man, right there in front of his eyes she jumped. That'd be terrible."

The conductor stopped the train, which had been going 79 miles (127 kilometers) an hour, and called for help.

The woman, whose body was found near the tracks in Stanton, Iowa, could not be revived, Sampson said.

Her passport showed that she entered the United States on October 30th and papers among her belongings indicated that she had been to Washington and Chicago since then.

There was no indication as to why the woman, who was traveling alone, jumped.

"By her picture on the passport she looked to be a pleasant type of person."

Investigators are awaiting the results of an autopsy and toxicology test.

They are also working with the French consulate to track down and notify the woman's family.

The train originated in Chicago and terminated in California.