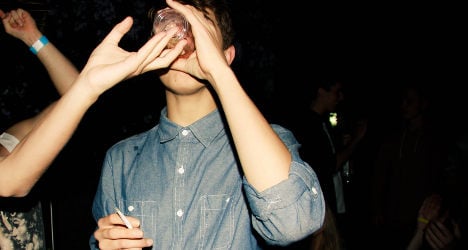 A French court on Tuesday found a students' union guilty of manslaughter for organizing a party which led a student to drink himself to death. Archive photo: Winnie Liu

A court in Nanterre, near Paris, on Tuesday found a students' association guilty of manslaughter for allowing hard alcohol to be served at a student party in 2005, during which a 19-year-old man drank 15 shots in half an hour, before dying of an alcohol-induced coma.

The then-president of the students' union, however, was acquitted of manslaughter.

On the night of September 22nd, 2005, newly-enrolled Alexander Thomas attended a special Roma-themed “student night” on the Châtenay-Malbry campus of the prestigious Ecole Centrale engineering school, near the French capital.

There, he drank no fewer than 15 shots of a so-called ‘Roma cocktail’ – vodka, Cointreau and lemon juice – in less than half an hour, according to French daily Le Monde.

The 19-year-old was carried back to his room by friends, who checked in on him the next day, only to find he had died during the night.

An autopsy found he had a staggering four grammes of alcohol in his system at the time of his death, which was caused by an alcohol-induced coma, a pathologist concluded.

Eight years on, the main defendant in the case stood accused of criminal negligence in his capacity as president of the university’s Residents’ Association, which organized the fateful “student night.”

During a hearing at the court in Nanterre, near Paris, the prosecutor accused the suspect of “a deliberate failure in [his] obligation to prudence and safety.”

The students’ association itself, convicted of manslaughter on Tuesday afternoon, only had a Level 2 alcohol license at the time, meaning it was allowed to serve beer, wine and cider, but not hard spirits.

The former president of the union acknowledged this fact, but claimed that the practice of serving and drinking liquor was tolerated on rare occasions.

Prosecutors had called for a six-month suspended prison sentence against the defendant, who is now a neuroscience researcher based in the United States.

In the end, the association was on Tuesday handed a symbolic €7,500 fine.

The tragedy brought to light what had become a rampant culture of heavy drinking on the campuses of French universities, in particular the most elite among them – the “Grandes Ecoles.”

“The exceptional nature of this drama [the death of Thomas] shouldn’t hide a daily reality that is as normalized as it is disturbing,” wrote Henri Haget.

Ultimately, the episode helped contribute to the 2009 Bachelot Law on public health, which – among other measures – banned free "open bar" nights at pubs and clubs, targeted at university students.

While the events at the centre of Tuesday's ruling took place in 2005, binge drinking among France's youth more generally, doesn't seem to have abated since then.

Those revelations came just two weeks after a report which found that, among the general population, 134 people died in France every day, from alcohol-related illnesses and incidents.