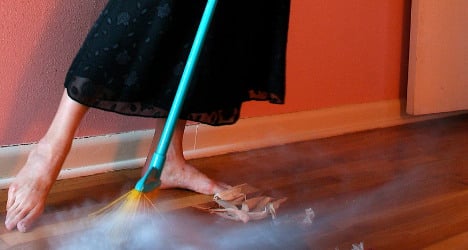 A cleaning lady at a French secondary school on Tuesday won a court battle against her former employers, who fired her after finding her pornographic blog. File photo: Stephanie Carter

Isabelle Cordeiro, by day a cleaning lady at a secondary school in the town of Romans, has won a court battle with her former employer after they fired her for having a particularly uncommon after-school hobby.

The website, which is in theory restricted to adults over the age of 18, is called “La Loupette” and features sexually-explicit photos, videos and audio recordings of the middle-aged Cordeiro.

In 2011, some of that content was distributed between pupils at the Lycée Albert-Triboulet in the town of Romans-sur-Isère near the French Alps, where Cordeiro worked as a cleaning lady.

The school’s management suspended her but – feeling her right to a private life has been summarily violated – Cordeiro initiated legal proceedings against the Rhône-Alpes region, which runs the public school and was technically her employer. “These pornographic images were distributed anonymously by students or school staff, without the knowledge of [Cordeiro],” said the court.

“Therefore, the trouble this caused [the school] cannot be blamed on her,” added the tribunal, ordering Cordeiro’s former employer to pay her €1,000 in damages.

The Rhône-Alpes region is appealing the decision.

Tuesday’s verdict, however, could set a notable precedent for a separate though almost identical case being brought by the former cleaning lady against, once again, the Rhône-Alpes region.

Cordeiro was fired from the Lycée des Trois Source in Bourg-lès-Valence, in the Drôme department, earlier this year after, once again, sexually explicit photographs from the La Loupette website were circulated at the school.