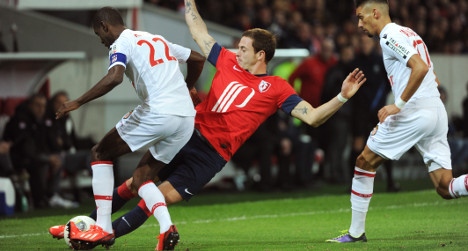 Roux's goals either side of the break extended Lille's run to seven games unbeaten and without conceding a goal and inflicted the first loss of the season on Monaco.

On paper this had looked a tough test for Lille against Claudio Ranieri's men who had begun the weekend level on points with table toppers PSG.

But Monaco found themselves returning home having slipped back into third, with Lille now on 26 points, two behind PSG who maintained their push for a second successive title with a 4-0 rout of Lorient on Friday.

"I am happy with my players but not with the referee," said Ranieri.

"There was a foul on Eric Abidal before the first goal and a penalty wasn't given.

"We had lots of chances. I am happy with the game and my team."

Lille coach Rene Girard said the win proved his team can compete with the likes of big budget clubs such as PSG and Monaco.

"It's a fine win, we were waiting to see how we would match-up against a good side like Monaco," he said.

"It was an offensive and defensive success."

Lille welcomed back Marko Basa, the Montenegrin having recovered from a thigh injury.

Monaco, beaten in the French League Cup in midweek, were unchanged from the side that saw off Lyon 2-1 last weekend after a thigh injury.

Basa celebrated his return by playing an instrumental part in Lille's 27th minute opener, his header high over the Monaco defence being flicked in by Roux.

Monaco, led by Falcao, came out after the break with all guns blazing to try and find a way through Lille's stingy back line but the home side held firm, and in the 71st minute doubled their advantage.

On the counter attack former Chelsea striker Salomon Kalou raced down the centre, passing to captain Rio Mavuba who in turn found Roux who completed the move by knocking the ball in to an empty net.

Earlier Bordeaux enjoyed a 2-1 win at Nice, while fourth-placed Nantes were held 1-1 at Montpellier.

Rennes's Portuguese striker Nelson Oliveira put the hosts in front from 20 metres on nine minutes, only for his effort to be cancelled out by Jordan Ayew after quarter of an hour.

Lyon ended their five-match winless run with a 2-0 home victory over Guingamp, Reims ran out 4-2 winners over Bastia, Valenciennes came away from their trip to Ajaccio as 3-1 victors, Evian/Thonon saw off Toulouse 2-1 and Sochaux and Saint Etienne ended 0-0.

Edinson Cavani scored twice in PSG's Friday's run out against Lorient which extended their unbeaten run to 23 games.