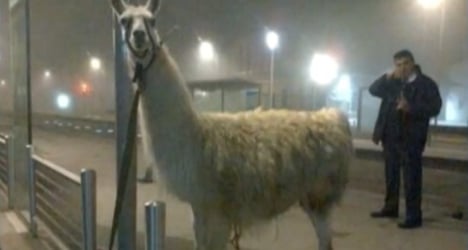 Serge the circus llama, after being rescued from a late-night tram ride at the hands of five drunken friends in the city of Bordeaux. Photo: Screengrab/FranceBestofTV/Youtube

When was the last time you had a night out this eventful?

For one group of young men in the south-western city of Bordeaux, a recent evening on the town took a turn worthy of the 'Hangover' movies, when they were photographed kidnapping a circus llama and taking him on a tram ride in the city.

The five drunk lads, apparently unwilling to call a halt to their fun after closing time, stumbled across a circus animal enclosure in the early hours of Thursday morning, and led away a llama named Serge (after the French crooner Serge Lama).

Parading their new pal through the city streets, they even managed to take him on an adventure on one of Bordeaux’s trams (see picture below), though it’s not clear what fare they paid.

The tram driver, however, apparently convinced he wasn’t hallucinating from lack of sleep, notified his employer Keolis, who intervened a little further up the line – confiscating Serge and tying him to a lamp post, while the five drunken kidnappers ran off, according to regional daily Sud Ouest.

Police caught up with the gang, however, and arrested them – appropriately – at Place de la Comedie, and Serge was brought home safe and well.

The group was held for a few hours on Thursday morning but later released. They had been facing criminal charges, with outraged circus director Jean Beatour telling Sud Ouest: “The offence is too serious. A zebra nearly escaped and we had to run everywhere to catch it.” The five friends, with the newest member of the gang, Serge the circus llama. Photo: RicA/Youtube

By Sunday, however, Beautour appeared to have changed his mind, telling TF1 television the circus had withdrawn legal proceedings against the young men.

“If there had been damage done in the city by the llama, then I would have had to cover myself. But because there wasn't any, I’ve withdrawn my complaint,” he said.

“[We’ve had] quite a few more people coming to see the circus show over the last few days, due to the incident,” he recognized, adding “I have nothing against these lads.”