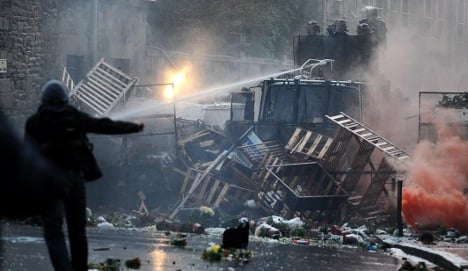 Three demonstrators were arrested while four protesters and a police officer were injured after scuffles broke out during the protest on Saturday afternoon.

Protest organisers said 30,000 people, including hauliers, fishermen and food industry workers, had gathered in the town of Quimper in Brittany to demonstrate against an environmental tax on trucks and layoffs, even though the government had earlier in the week suspended the application of the so-called ecotax.

Authorities estimate that 15,000 people joined in the protest.

Some of the protestors pelted police with stones, iron bars and even pots of chrysanthemum, while others burned palettes. Police responded with water cannon and tear gas.

The prefect of the department of Finistere, Jean-Luc Videlaine, blamed the violence on a "marginal group" of right-wing extremists, who he said were believed to be among the protesters.

Before the weekend, Prime Minister Jean-Marc Ayrault had warned against any "spiral of violence" in Brittany, after previous clashes last week during similar demonstrations.

It came under fire from farmers and food sector workers across the country, but especially in Brittany, where the economy is heavily dependent on agriculture.

Even though the government has said the tax would not take effect on January 1st as previously planned, protest organisers say it is not enough, demanding instead a permanent suspension of the tax.

On Saturday, protestors marched under banners such as "Right to work", "Bretons yes, sheep no" and "France is not a cash cow".

Many also wore red caps, a symbol of the anti-tax campaign in Brittany in the 17th century.

"I'm here to defend my job," one of the protestors, Genevieve Tanguy, 37, an estate agent told AFP. "In Brittany, we are united. Personally, I would not hold up with all these taxes."

Another protester, 52-year-old mason Claude Sergent said the taxes "are killing us".

Christian Troadec, one of the main organisers of the rally, called the demonstration "a great success for employment in Brittany".

The ecotax was adopted by Nicolas Sarkozy's centre-right UMP government in 2009, but its implementation has repeatedly been put off.

Officials said the suspension of the tax, which would raise about €1 billion per year, would last at least several months.

Environmentalists slammed the Socialist government for postponing the tax, with Green MEP Jose Bove calling the move "pathetic" and an "incredible retreat".