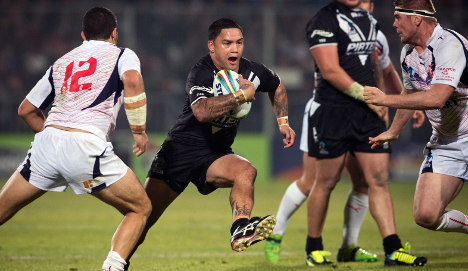 Johnson filled the giant boots vacated by union-bound Benji Marshall with aplomb, notching up a brace of tries in a personal tally of 24 points and also kicking out of hand to great effect after the power of his tough-tackling pack handed him the field territory he needed.

New Zealand coach Stephen Kearney hailed his team's defence, which had come in for some criticism in his team's opening pool victory over Samoa.

"It was an area we highlighted against Samoa that needed improvement," Kearney said. "I thought the lads did really, really good in that area tonight — the French side threw everything at us. I thought it was a pretty solid performance right through the whole match."

France coach Richard Agar was left ruing the too-big deficit in the scoreline, blaming a lack of smartness, notably in attack.

"I want to applaud my players for doing the best under fire," the Englishman said.

"But I'm disappointed we didn't keep the scoreline more competitive."

Attack "had the biggest room for improvement", he said, calling for "more intelligent" decision-making in their next pool game against Samoa. New Zealand will go close to winning the competition," he added.

Kearney made wholesale changes from the side that beat Samoa 42-24 last weekend, including opting to rest code-swap star Sonny Bill Williams.

But that did not deter a reshuffled New Zealand side up against a France team that pipped Papua New Guinea 9-8 in last weekend's opener, but which looked terribly short of attacking options despite a valiant defensive display in Avignon.

The Kiwis, dominant throughout, took under four minutes to get on the scoreboard and silence the raucous 17,000-capacity crowd, centre Krisnan Inu latching on to a flat Kieran Foran cross-field kick to twist over the line.

Johnson hit the extras, his first of his eight successful conversions.

Despite a disallowed Frank Pritchard try, and repeated charges from prop Ben Matulino and captain Simon Mannering in midfield, France held their own for a couple of Kiwi attacking sets, proving a much sterner test than the Samoans had in the first-half.

When France's teenage Salford half-back Theo Fages darted through, there was a sniff of the line, but the black defensive curtain came down.

A second cross-kick to the left wing then caused havoc, Bryson Goodwin outleaping the French defenders to score, and Frank-Paul Nu'uausala crashed over for the Kiwis' third try from a short Johnson pass to make it 18-0 at half-time.

The increasingly influential Johnson scored a converted brace early in the second period, both times the recipient of smart offloads from darting dummy-half Isaac Luke.

Replacement prop Greg Eastwood did well to ground the ball for the Kiwis' sixth try, with four Frenchmen hanging off him.

French winger Cyril Stacul brought the crowd to their feet when he broke after a loose Kiwi pass, but full-back Kevin Locke was on hand with a try-scoring tackle.

Instead Nu'uausala went over for his second with the French defence wilting despite the best efforts of props Olivier Elima and Sydney Rooster-bound Remi Casty.

Locke then nailed Fages after the Salford half-back broke free, but there was to be no late consolation try for the French in the resulting action after the video referee ruled out Stacul's effort in the corner.

Winger Roger Tuivasa-Scheck had the last laugh for the Kiwis, going over in the corner, Johnson fittingly having the final word with a tricky conversion for an exemplary showing.

The Kiwis wrap up their Pool B campaign against Papua New Guinea in Leeds on November 8th, while the French host Samoa in Perpignan two days later with everything still to play for given that three of the four teams in the pool advance to the quarter-finals.