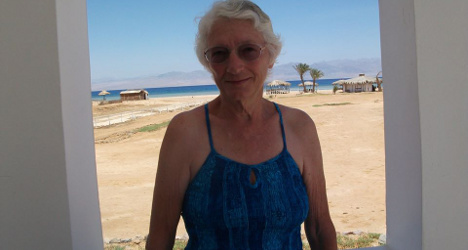 73-year-old Carol Sheridan, originally from Salford in England, who has been missing in Haute-Savoie since October 27th. Photo: Heather Tanton

Retired teacher Carol Sheridan, originally from Salford in Greater Manchester, was last seen driving away from her home in Habère-Poche, in the Haute-Savoie department of Rhône-Alpes, on Sunday October 27th.

A source close to Sheridan told The Local she is a hiking enthusiast, and it’s thought she had gone out for one of her regular solo mountain walks last Sunday, without telling anyone exactly where she was going.

Sheridan’s daughter Fiona Conyers, who lives in New Zealand, alerted local police on Tuesday, but a search of the surrounding area has so far proved fruitless.

The town of Habère-Poche is located 20 km west of the Swiss border on Lake Geneva, and roughly 90 km from the Italian border to the south-west.

Sheridan’s family and friends are particularly keen to track down the whereabouts of the vehicle she was driving last Sunday, a black Fiat Panda 4 x 4 with the license plate AZ522AP, similar to the one pictured here:

Sheridan’s granddaughter Heather Tanton told The Local she and the rest of her family were concerned by what she called an uncharacteristic lack of contact from the 73-year-old, who retired to France over a decade ago.

“This is very much out of the ordinary. She’s in regular contact with us and wouldn’t go this long without saying something,” said Tanton.

“She’s very resourceful though, so if she has got herself stuck somewhere, we’re hopeful she’d know what to do,” she added, noting her grandmother is “a wonderful, generous, kind woman.”

Local police have informed Tanton that Sheridan's home did not show signs which would indicate she had left on a planned trip.

If you have any information regarding her whereabouts, or the whereabouts of her vehicle, please phone 0044-800-098-8485.