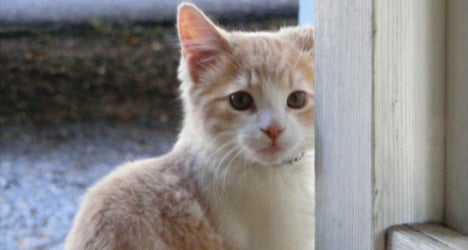 This is not the kitten in the article. File photo: Energetic Spirit/Flickr

The kitten of about two-months-old was adopted on October 25th from the streets of Argenteuil, about 15 kilometres northwest of Paris.

But three days later, it died and its owners contacted a vet who decided to test it for the disease, local government official Gilles Prieto said.

"The kitten was displaying aggressive behaviour. It bit and scratched its owners," he said.

The kitten was confirmed to have rabies, which France says has been officially eradicated from its territory since 2001. The strain of virus found had apparently stemmed from Morocco.

"Five people who were in contact with the kitten have been identified" and given preventive treatment, the health and agriculture ministries said in a joint statement.

Another five people were on Friday found to have come into contact with the kitten and were also set to receive preventative treatment.

To avoid any contamination a public information unit has been set up and an epidemiological probe has been launched to track any other people who may have come into contact with the sick animal.

Authorities are now trying to determine how the kitten got to Argenteuil. No other cases of animals showing similar symptoms have been reported.

"The most likely theory is that it was brought back with a family coming from Morocco a few weeks ago," said Prieto.

If this was true the risk of an epidemic is limited as cats tend to stick to a radius of one kilometre, he added.

In 2008 a dog imported from Gambia was found to have rabies.

Only 10 countries and regions in the world are listed as rabies-free. Some 55,000 people die of the disease worldwide every year.

Symptoms in humans include seizures, partial paralysis, fever and brain inflammation, or encephalitis.

There is no known treatment to cure rabies once the infection has taken hold.