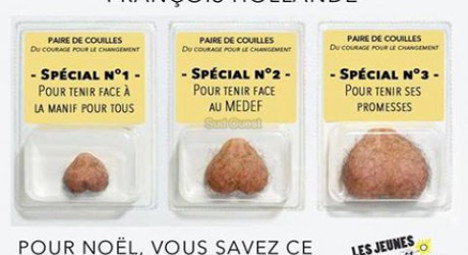 Not long after French Prime Minister Jean-Marc Ayrault had made the controversial announcement that he was putting on hold a planned "ecotax" on heavy goods vehicles, furious young Green party activists decided they should take a stand.

Eager to make their point that yet another climbdown on a green initiative, which came not long after a decision to ditch a planned tax on diesel fuel, showed that President François Hollande was weak, the Ile de France branch of the young Greens (Jeunes écologistes) suggested Hollande could do with a "pair of balls" (couilles in French) for Christmas.

To make their point the group published a photo montage on their Facebook page showing a range of three pairs of fake testicles with the title: “A present from the young Greens to Hollande”.

However the stunt backfired with many furious Green party activists complaining that it was sexist. The image was soon pulled from the website, but not before the website Politis, managed to take a screen grab, which has since been reproduced throughout the French media.

Jordan Trombetta coordinator of the Ile de France young Greens told Rue 89 news site said: “Some people found it contrary to the values of the party. We are not using this campaign anymore. It was a communications error."

Lucas Nédélec, who is in charge of the young Greens at national level added: “Many activists, both men and women were outraged. It is a sexist image and you have to admit it.”