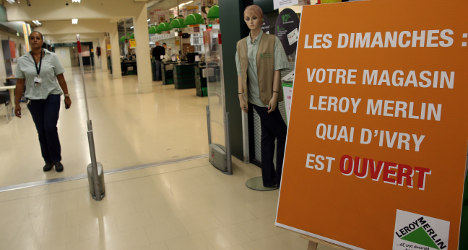 A French court has granted the two DIY chains Leroy and Castorama permission to open on Sundays, according to the companies' lawyer on Tuesday.

Under French law, retailers can open on a Sunday only under specific conditions: if they are located in a tourist or a high-density area.

Any shop selling food, such as a butcher, can operate until 1:00 pm.The appeal court ruling comes just weeks after the stores were forced to close after rivals Bricorama lodged a complaint.

Castorama's lawyer Richard Renaudier said the two chains would open their stores from this Sunday following the ruling.

"This is only a first step," he said, underscoring that  a more definitive ruling was due on November 22 following another suit launched by Bricorama in July.

Bricorama was also ordered by the appeals court to pay Leroy Merlin and Castorama 12,000 euros each in damages and interest.

The group's head Jean-Claude Bourrelier said the ruling was "totally incomprehensible" and "unjust".

The court’s decision could set a precedent and lead to a further relaxation of France’s strict laws on opening times.

DIY chains Leroy Merlin and Castorama had been ordered to shut 15 of their branches in the Ile-de-France region by a court in Bobigny earlier this month.

The decision angered the stores bosses, who ignored the ruling and opened for business, in direct defiance of the court order.

The trade tribunal labelled it a “flagrant violation” of French law that they had remained open while competitor Bricorama was forced to close its doors on Sunday.

Leroy Merlin and Castorama workers had protested outside the court, demanding the right to work extra hours for extra pay.

The French Prime Minister responded to the ongoing row over Sunday shop openings by announcing a review of the current framework of laws and regulations.

Jean-Marc Ayrault tasked former head of La Poste Jean-Paul Bailly, to look at the "weaknesses of the current system, clarify the issues around the opening of some shops on Sundays and make a list of propositions to the government."

Bailly is set to present his conclusions to the government by the end of November.

However shortly before Ayrault's office at Matignon announced the review the country's Labour Minister Michel Sapin suggested that anyone hoping to see more shops open on Sundays should forget about it.

Sapin said the principle of “Sunday rest” would not be touched, despite defiant openings by retailers over the weekend, and protests by workers keen to put in extra hours.

“We have a rule – the principle of Sunday rest,” Sapin told journalists. “And it is out of the question that this rule should be touched,” he added.

The woolly legislation has infuriated those who want to work on Sundays and drawn criticism that the laws are ill-suited to a time of economic hardship.

The controversy comes at a time when France, with the second-biggest economy in the eurozone after Germany, is grappling with record unemployment of more than three million and growth has stagnated.