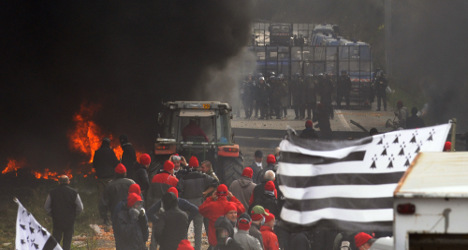 Protesters face riot police on October 26, 2013 in Pont-de-Buis, western France, as they demonstrate against an ecotax planned to come into effect on January 1, 2014. Photo: Fred Tanneau/AFP

French Prime Minister Jean-Marc Ayrault announced on Tuesday that France would be suspending the introduction of a controversial "ecotax" on transport.

The surprise development comes after he held "emergency talks" with elected officials from Brittany, which was the scene of angry protests at the weekend.

In the latest government backdown on a controversial tax hike, Ayrault said the application of the tax had been put off across the country so the government can listen to opponents.

"Courage is not obstinance, it is listening, understanding," Ayrault told reporters after urgent government talks that followed clashes between police and anti-tax protesters in Brittany on Saturday.

"This is why I have decided to suspend the implementation of this ecotax, to give the time needed for dialogue at the national and regional level," he said.

He insisted however that the decision was "a suspension, not a cancellation" of the tax.

But Ayrault’s decision has angered environmental groups in France.

“It’s pathetic. He has no political courage,” said Bruno Genty, president of France Nature Environnement. “A measure that was voted by the Right and the Left is called into question as soon as a few people start breaking public property.”

“The environment has become the scapegoat for economic problems,” said Genty, who pointed to the fact that ten other countries had introduced a similar tax and it was “working very well.”

Others however said the move did not go far enough.

"This is not enough," Christian Troadec, the mayor of the town of Carhaix and a key protest organiser, told AFP.

"Brittany is demanding the permanent suspension of the ecotax, especially since we don't know how long this moratorium will last," he said.

It may have been introduced by its predecessors but the planned ‘ecotax’, that was set to come into force in January 2014, was becoming a major headache for the current Socialist government.

The tax on heavy goods vehicles, designed to promote greener commercial transport, had provoked widespread discontent in Brittany, where violent protests against the new levy were held on Saturday.

The protests have grown despite earlier government promises to help the food sector and partially exempt Breton roads.

With further demonstrations planned, PM Jean-Marc Ayrault held talks with various elected officials from the region on Tuesday in the hope of quelling the rebellion.

The government had hinted it may be willing to compromise in order to help a region already hit hard by the economic crisis, but the suspension of the levy has come as a surprise to many in France.

But after the Socialists were forced to back down on their plans to tax savings programmes at the weekend, it had been warned about the dangers of performing another U-turn.

"If the government climbs down on the ecotax it will have no more authority over anything,”  said Green party senator, Jean-Vincent Placé.

The Green group, which forms an important block in President François Hollande's coalition government are likely to see red over the U-turn. Party bosses were already miffed over the sacking of lawmaker Delphine Batho and the decision by Hollande to ditch a planned diesel tax.

However Minister for Agriculture Stephane Le Foll told the media on Monday that it would impossible to scrap the planned tax because contracts had already been signed with the company tasked with running the scheme.

Critics say the ecotax will seriously damage Brittany's farming and food sectors by increasing transportation costs – driving some companies out of business and leading to major job losses.

Under the scheme, which is estimated to be worth €1 billion a year in tax revenues, lorries would have been taxed as they pass through electronic “portiques” or scanners, while they deliver products and produce around France.

The ecotax, which was first put forward under the presidency of Nicolas Sarkozy, would have been paid by all trucks, both French and foreign, travelling on certain roads. Toll roads like certain autoroutes were excluded from the scheme.

The aim was to encourage companies to use greener forms of transport and opt for shorter journeys, where possible.

Dominique Barrau, the secretary-general of the FNSEA farmers union, has complained that “some French products will pass through the gates five times compared to those that come from abroad, which will only pay when they arrive in the territory.”

The FNSEA had earlier asked for the implementation of the ecotax proposal delayed until 2016. With Tuesday's suspension, it appears they may have been granted their wish.

Under the plan, all heavy goods vehicles over 3.5 tonnes would have had to pay the levy. A total of 10,000 km of motorways, national roads and 5,000 km of county or municipal roads were to be included in the scheme.

Certain vehicles used for the good of the general public like fire engines and police trucks were exempt from the tax.

All vehicles that liable for the tax would have been obliged to be equipped with an On Board Unit (OBU) which would calculate the amount of ecotax due, based on the distance travelled and which roads were taken.

For more information about the tax on heavy goods vehicles in France, you can CLICK HERE.