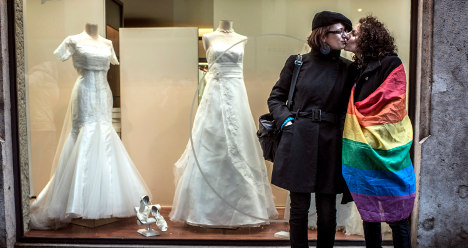 Just six months after gay marriage was legalized in France, the state has received, apparently for the first time, a divorce petition from two young women. Photo: Jeff Pachoud/AFP

A little more than six months after the first wave of gay weddings in France, the country has seen what appears to be its first same-sex divorce, France TV reported on Tuesday.

The case involves two young women who were originally married in the United States in 2011, and had their marriage officially recognized by the French state during the summer of 2013.

The couple’s lawyer, Rémy Rubaudo, filed for divorce on the joint behalf of the couple, earlier this month, according to France TV which notes that while the justice ministry doesn't keep such information on file, LGBT groups and lawyers said they hadn't heard of another gay divorce so far.

The formal acknowledgement of their marriage by France, however, wasn’t quite as romantic a development as it might seem.

According to Rubaudo, the two women had already been separated for several months but wanted to be legally married on this side of the Atlantic, specifically so that they could get divorced, and therefore avoid potential legal pitfalls regarding shared financial debt, and so on.

Long before gay marriage was made legal in France, enterprising businessmen Simone Faucher and Stéphane Cola saw the potential in gay divorce, setting up their website www.divorce-gay.fr in February.

The website features an inventory of French lawyers chosen for their particular ability to cater to gay men and lesbians seeking advice about divorce.

In a statement, the creators of the new gay-friendly directory explained the rationale behind the move.

"As gays and lesbians gain new rights and freedoms, this also creates new complications and difficulties – legal, financial, and to do with inheritance – that up to now only heterosexuals experienced."

After months of sometimes violent and rancorous debate, France became the 14th country in the world to legalize same-sex marriage in April, and the next month Vincent Autin and Bruno Boileau made history by becoming the first gay couple to be married in France, at a ceremony in Montpellier.