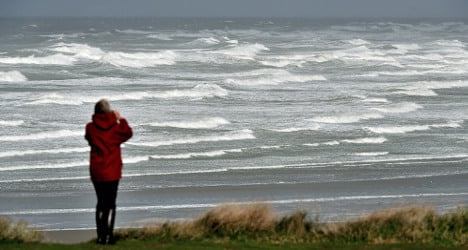 A woman looks out across the English Channel from France as fierce winds and torrential rain batter the region.Photo: Philippe Huguen/AFP

The fierce storm which hit the northern region of France on Sunday night and Monday morning, has claimed its first life, according to French media reports.

A woman in her 50s on Monday morning fell victim to 'Tempête Christian' as the storm is known, after she was swept away by a wave amid strong winds, at Morbihan on Belle Ile, a small island off the coast of Brittany.

A rescue effort involving emergency services, a maritime safety boat, and a helicopter were unable to save the victim, according to local authorities, who spoke to AFP.

Earlier, two ferries carrying more than 450 passengers were left stranded in stormy seas off Dover after a massive storm shut down the British port.

The stormy weather meant it was too dangerous for the two ferries, one carrying 398 passengers and the other 65, to be able to enter the Kent port. However after a few hours stuck at sea the boats were given the green light to continue their journey as seas around the port calmed.

In a separate statement, a spokesman for P&O ferries said the port at Dover had been closed since 6:30 am (0630 GMT), adding that the gale-force windswere expected to slow down and the port would reopen by noon.

Meanwhile fierce winds of up to 140 kmh and torrential rain hit Normandy and Brittany in the early hours of Monday, leaving around 75, 000 homes without power.

The Finistere region in the west of Brittany was the worst affected area where up to 30,000 were hit by power cuts.

There were a similar number affected in Basse Normandie after the storm, that has been named Christian, resulted in electricity being cut during the night. Another 10,000 households were left in the dark in Haute-Normandie and Nord Pas-de-Calais.

“The problem is that the storm is moving. Some households are having power restored while others are having it cut off at the same time,” said a spokesman for French electricity provider ERDF.

“We are doing our best to rectify the situation as quickly as possible,” he added.

The storm, which has also hit south west Britain, brought down trees, which left several roads blocked including the A131 motorway.

Cross-channel train service Eurostar said it would not be running trains on Monday until 7:00am, meaning delays to early services.

The strong winds in the Paris region forced authorities to close Château de ersailles. The famous tourist attraction may reopen later in the day however.

Were you affected by the storms? Let us know or send us your photos to [email protected]