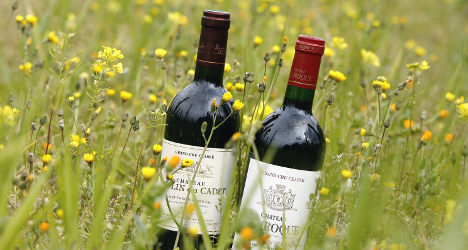 The French are developing a thirst for organic wine. Photo: Jean-Pierre Muller/AFP

According to a new Ipsos poll carried out in advance of the 2014 Montpellier Organic wine fair "Millesime Bio", one in three French people are already drinking organic wine or “Vins bio” as they are known.

When it comes to the sales figures, they tell a similar story. According to figures quoted in the news site 20 Minutes on Monday the turnover of “Vins bio” in 2012 totalled €413 million compared to €249 million in 2007.

France is home to around 65, 000 hectares of vineyards dedicated to organic wine or in other words 8.2 percent of the total area of land used for wine making. That represents a jump of three percent compared to 2011, but it is not enough to put the country top of the European league table.

When it comes to the amount of land used for growing organic wine, Spain is out in front, with France tucked in behind and Italy in third.

Of the “Made in France” organic wine 60 percent of it is guzzled in France and the remaining 40 percent is exported with Germany, the United States and Japan the main recipients.

In terms of French regions Provence-Alpes-Côte-d’Azur is leading the way for organic wine production.

A move towards organic wine is the not the only change taking place in the French wine industry. Last week The Local reported how some of France’s elite wine-makers are looking beyond Bordeaux and Côtes-du-Rhônes and planting roots in China.

But in general however all is not well in France’s wine industry with wine makers finding a new government plan to reinforce health warnings on bottles hard to swallow.

“You cannot warn about the dangers of alcohol or suggest how many glasses you should drink by putting it on a label on a bottle of wine. People need to be educated about this," he said.