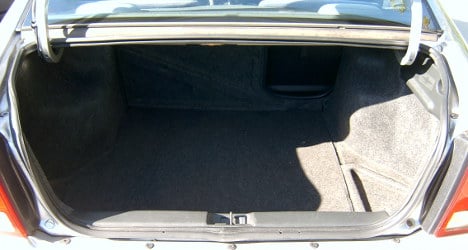 Mechanics doing repairs on a car in south-western France over the weekend made the appaling discovery of a naked, dehydrated baby girl in the car boot. Archive photo: Daniel McConnell

Workers at a garage in Terrasson, in the south-western department of Dordogne were alarmed to hear moans coming from the boot of a car brought in for repairs on Friday by a woman aged in her 40s.

The mechanics also became concerned about the strong odour of excrement coming from the boot of the Peugeot 307 Break.

However the woman reportedly dismissed their concerns, explaining that the strange noises were coming from toys which had just been switched on.

Unconvinced, the mechanics opened up the boot, only to find a naked and dehydrated baby girl in a basket, aged between 15 months and two years old.

“I felt that the baby needed air, that she was going to suffocate,” one of the mechanics told TF1 television.

The girl was conscious but in a filthy state and appeared to have a fever, the mechanics reported. Paramedics were called and she was immediately taken to hospital in nearby Brive-la-Gaillarde, TF1 reported.

The mechanic who found the girl, Guillaume Iguacel, told AFP on Monday that he was still reeling from the discovery.

"I'm still having trouble sleeping, it was a horrifying sight, seeing this little girl in her own excrement, not able to hold up her head, white as a sheet," he said.

Iguacel said the girl's mother appeared to have little concern for her daughter.

Offering further details on the girl's condition, local prosecutor Jean-Pierre Laffitte said: “The infant doesn’t have the right size or weight for her age, she is psychologically delayed, and she displays a mentality and behaviour that don’t conform to her age."

“The baby was hidden from all points of view, apparently since birth. It’s a situation that defies belief,” he added.

The story has horrified the French public since it broke over the weekend and Le Parisien newspaper reflected the tone of most reactions with their headline on Monday: "The inconceivable existence of the baby in the boot."

As if the initial discovery was not shocking enough, disturbing reports from neighbours suggest that the girl may have been kept hidden away in the boot of the family car since birth.

"We had the impression that this woman lived in her car. She never left it," said Pascale, one of the family's neighbours.

"I recall seeing her several times a week with her car parked in a little lot about 200 metres from her house," she added, referring to a carpark hidden from view, between fields and a row of houses under construction.

"But we couldn't see what she was doing in the boot," said Pascale. Other neighbours told Le Parisien that the 45-year-old mother, named only as Rose-Marie, frequently used cardboard to cover the car.

The couple’s neighbours have been reacting with shock to finding out the couple had a fourth child whose birth was never even registered with the state, and may even have been unknown to her father, a 40-year-old unemployed stone mason.

“The car always stayed outside at night [and not in the garage], so if the little girl was inside it, we didn’t see anything,” said one.

“We didn’t have much contact with them. [The mother] barely said hello, and they didn’t really want to integrate into the neighbourhood. How could we have known?” Claude, a pensioner who lives opposite the couple, told Le Parisien.

Police arrested the mother and father, who was heavily drunk at the time, on Friday.

For his part, the girl’s father has told investigators he was completely unaware of the child’s existence until her discovery on Friday, a claim backed up by the mother during her interview with police.

The parents, originally from Portugal but living in Brignac-la-Plaine in the department of Corrèze, have been charged with child abuse and neglect, and social services have taken into care their three other children, aged between four and 10 years old.

The couple risk ten-year prison terms if convicted, but prosecutors have emphasized that as of yet the case features many unanswered questions.