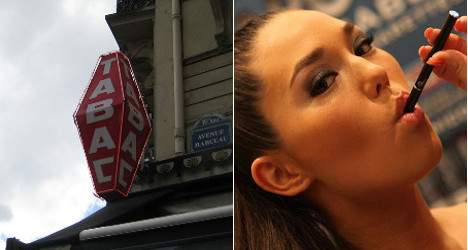 Annie Pontus, who runs a tobacco shop in Plaisance-du-Touch, near Toulouse, on Monday took to court e-cigarette store “Esmokeclean,” located just 100m from her shop.

The case is the first of its kind in France, and the verdict could set a legal precedent in a growing war between increasingly popular electronic cigarettes and their conventional tobacco rivals.

Explaining recently why she had decided to take legal action against Esmokeclean, Pontus old Europe1 radio: “It’s the advertising that bothers us.”

“On their window it says ‘smoke another way’, and things like that. We don’t have the right to advertise but these people, who sell nicotine-based products, do," she added.

According to Pontus and her lawyer, e-cigarettes and their liquids contain nicotine, so should therefore be placed in the same legal bracket as tobacco products.

She also believes the government should regulate their sale and make it law that tobacconists have the exclusive right to sell the devices.

“If these shops have all their rights, including that of advertising, I don’t see why newsagents don’t also have those rights,” she said.

The tobacconist's legal action comes after the European Parliament ruled earlier this month that e-cigarettes were not in fact medicinal and could therefore remain on open sale.

If the bill gets approved by the 28 member states then both private stores and tobacconists will continue to have the right to sell the hugely popular electronic cigarettes.

The EU bill also seeks to outlaw all advertising of e-cigarettes in an attempt to discourage all forms of smoking.

Reynald Pirat, one of the owners of Esmokeclean, seemed to suggest he thought the case was a lot of hot air, calling it a “tall tale.”

"I absolutely do not make the same product as them, " he said. “They are the addiction and we are the cure, it’s ironic really” he said.