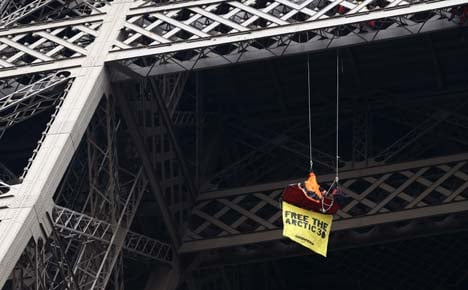 A Greenpeace activist in a tent hanging from the Eiffel Tower to protest the custody of the "Arctic 30." AFP Photo / Thomas Samson

The activist also unveiled a banner with the slogans "Free the Arctic 30" and "Militants in prison, climate in danger", forcing authorities to close the French monument to tourists in the morning.

The protest, which began at around 9 am (0700GMT) ended two hours later after firemen removed the activist from the site.

Moscow has sparked an international outcry over its heavy-handed response after two Greenpeace activists in September scaled a state-owned oil platform to protest against Russian energy exploration in the Arctic.

It detained 30 crew members of the Dutch-flagged icebreaker Arctic Sunrise, including two journalists, in the northern Murmansk region, on piracy charges, which prosecutors later reduced to hooliganism.

Cyrille Cormier, a Greenpeace campaigner, told AFP: "We are here to send a message to the French government to do everything to secure the release of the 28 militants and two journalists."

"Prime Minister Jean-Marc Ayrault is due to visit Russia next week. We are asking him to put this case on the agenda," he added.