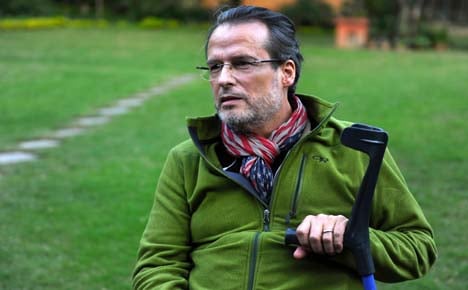 "I am a happy person. Probably a little crazy…just a little. First, happy," 55-year-old Frenchman Marc Kopp told AFP in Kathmandu ahead of his scheduled tandem skydive next week.

Kopp, who lives in Longwy, northeast of Paris, has suffered for more than a decade from multiple sclerosis, the degenerative nervous system disease which French MS sufferer plans Everest skydive disrupts the brain's ability to communicate with the body.

Muscles weaken, lesions emerge on the brain and spinal cord and in the worst cases, patients can lose the ability to speak or walk.

Although he usually uses a wheelchair, few places in Nepal are disabled-friendly so he manages with a walking stick, holding on to his friend, champion skydiver Mario Gervasi who will accompany him on his jump.

It was 13 years ago when Kopp, then a senior manager in local government, felt a haze before his eyes. He dismissed the blurred vision — a symptom of MS — as a sign of working too hard.

Then he had trouble moving his right leg, experiencing sharp pain when he tried to do the simplest tasks.

His right arm followed and soon, his whole right side hurt. An enthusiastic horseman, eventually, every activity became painful.

After a battery of tests, he was diagnosed in 2001 with primary progressive multiple sclerosis, a form of MS with almost no prospect of remission.

"I thought I was prepared to hear anything, it had taken so long, one year to diagnose the cause. But when I heard the news, it hit me hard," he said.

A friend sent Kopp MS-related reports but he couldn't bear reading them.

"But my wife looked at all of them and saw our future," he said.

"Seeing her so frightened made me realise I had to be strong, I had to face my illness," he added.

As his condition worsened, he became increasingly determined not to simply become a victim and instead began volunteering for a support group for fellow
sufferers.

When he met Gervasi last July at a parachuting event in Lorraine, the skydiver who has jumped over Everest and over the North and South poles, was planning a trip to Nepal with French football legend Zinedine Zidane.

But a clash of schedules meant the footballer could not join him and instead, he asked Kopp if he wanted to skydive over the mountain together.

It took Kopp less than a minute to say yes.

"Why not? I felt like I would send a message of hope. Even if you are sick, you are still alive."

The exact timing of the jump depends on the weather but it could be as early as Monday.

"I always wanted some adventure in my life, like my childhood hero Tintin," he said, referring to the Belgian comic book hero who also travelled to the Himalayas in search of excitement.