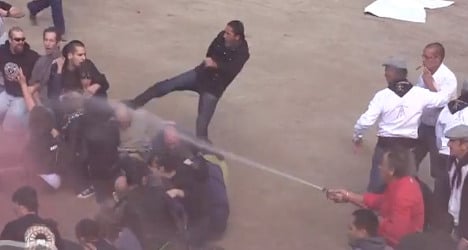 The French village of Rodihlan is on lockdown amid fears of a repeat of these scenes witnessed in 2011 when protesters were punched and kicked in the ring. Photo: Screengrab/AFP

In October 2011 a demonstration against a bullfight in Rodilhan in the Gard region of southern France turned ugly when protestors were kicked and punched and forcibly removed from the bull ring. (see video below)

This weekend marks the annual two-day bullfighting festival in Rodilhan and protestors are once again set to demonstrate their opposition to a tradition that is still legal in parts of southern France.

Fearing a repeat of the ugly scenes of 2011, authorities in the village will set up a 400 metre cordon around the arena, which protestors will be forbidden from passing.

“It’s like they are preparing for a war,” one local villager told Midi-Libre newspaper.

Scores of riot police have been drafted in to keep the peace, amid fears certain protesters will be looking to avenge the beatings they were given two years ago, which are still the subject of legal proceedings.

This year the ranks of protestors, most of whom are from France’s anti-bullfighting organisation CRAC (The Radical Committee Against Corrida), will be swelled by a contingent from various US-based animal rights groups.

Los Angeles-based Carole Davis from Friends of Animals told The Local they were “terrified” of being attacked, but had to stand up against a “despicable tradition”.

“We have been told to expect the use of water cannon by police and we have been to the chemist to buy solution in case people use CS gas against us,” Davis said.

“We are coming in peace to try and stop them from killing these bulls. It’s outrageous that they are allowed to take place because of a small minority.

“This does not fit in with the image of France that we love. Nowhere on the French Tourism website is there any mention of the cruel blood sport of bullfighting.

It’s a tradition that needs to be abolished, like slavery was.”

Davis says 40 California school children have also sent letters to the mayor of Rodilhan and the French ambassador in Washington, D.C., asking them to “stop the killing.”

SEE ALSO: 'Bullfighting is a French tradition, leave us in peace' A Facebook page under the title "Tous a Rodilhan" (Everyone to Rodilhan) has been set up to coordinate the protesters, over 1,000 of whom are expected to turn up.

The General Secretary of Rodilhan Town Hall told The Local on Friday the protesters must respect the cordon, or they will face arrest.

“We will do everything that can possibly be done to keep the peace, but after that it will depend on the protesters themselves and their leaders. People are coming to watch 'la Corrida', which is legal here, and that needs to be respected.

“The police will take all necessary action to protect the protesters and the spectators.

“We are in a region where the Corrida is a tradition that has existed for many years. It’s not just in Rodilhan but all over the region.” 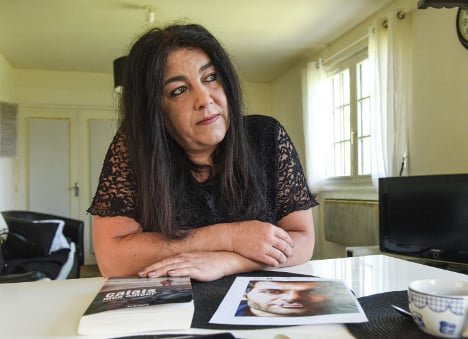 B
The French far-right voter on trial for helping a migrant
Url copied to clipboard!