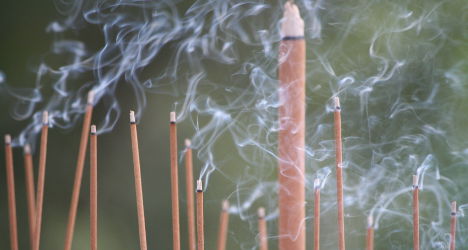 Ministers in France this week called for a ban on scented candles and incense, which health authorities say could be carcinogenic. Photo: Vijay Chennupati

It’s one of the last refuges from the high-stress, modern world. A quiet room, and some scented candles or incense sticks is the relaxation method of choice for millions throughout the world, including France.

But the French government announced plans this week to introduce a ban on certain products, citing concerns that the aromas are hiding the release of carcinogenic chemicals.

The government has also noted that many of the products claim to "purify the air" but in reality are more likely to do the exact opposite.

In their “Action plan for indoor air quality”, the country’s ministers for health, housing and the environment this week warned of domestic pollution caused by painting and decorating, cleaning products, and tobacco smoke.

But scented candles and incense were singled out for condemnation as “among the most polluting products”, due to their emission of harmful substances.

When burned, incense sticks emit  the carcinogen benzene, as well as formaldehyde, an irritant gas that can cause particular damage to nasal passages, and even lead to an increased risk of developing leukemia.

Scented candles also give off formaldehyde, as well as acrolein, according to INERIS, the National Institute for Industrial Environment and Risks.

Of the two, incense sticks pose a particularly grave risk to health, it would seem.

“[Incense] emits far more than scented candles, and using them appears to pose risks, even in the case of [only] monthly use,” claimed INERIS.

The products are clearly popular in France with half of respondents to a 2009 survey saying they regularly used them at home.

The French government is now expected to draw up a “black list” of products and substances which send harmful substances into the atmosphere, and could ban scented candles and incense within the next few months.

In recent months France has seen a series of recent moves to ban or discourage the use of certain everyday consumer products, for health reasons. On Thursday the French parliament voted to impose a tax on energy drinks such as Red Bull, citing concerns over their high levels of caffeine, sugar and taurine.

Last month, The Local reported how a leaked government report called for new taxes on electronic cigarettes, artificial sweeteners like aspartame, and flavoured wines, in order to discourage their use and consumption.

Do you use scented candles and incense? Would these health warnings make you think twice about it? Join the conversation in the comments section below.