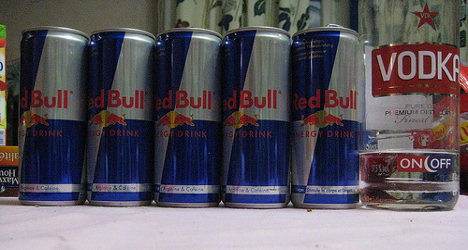 Deputies in the French parliament voted on Thursday to introduce a new tax on energy drinks at €1 per litre.

With an estimated 60 million litres of energy drinks consumed each year in France, the levy, which has been dubbed the “Red Bull tax” should pull in €60 million each year for state coffers.

The tax is part of raft of measures aimed at bridging the gaping €14.3 billion hole in France’s social security system.

But will the tax ever become law?

Last year a similar proposal to tax energy drinks fell at the final hurdle, when, after being adopted by parliament, it was spat out by France’s highest legal body the Constitutional Council.

That first "Red Bull tax" went before the 'Conseil Constitutionel' in December last year but was rejected, with the court arguing that although the tax was aimed at tackling boozing among France’s young people, the levy taxed certain non-alcoholic drinks without any “objective or rational criteria”.

But the proposal adopted on Thursday by deputies in the National Assembly is different in that it is motivated by the health risks associated with consuming energy drinks, even when they are not mixed with alcohol.

Brands like Red Bull, Monster, and Dark Dog may have found their place on French supermarket shelves in recent years, but they have long alarmed public health professionals due to their high levels of caffeine, sugar and other substances such as taurine.

Especially when mixed with alcohol, and consumed by young people (who are their primary enthusiasts), these energy drinks have been linked to several heart attacks and even deaths in France and beyond.

Nearly nine million French consume the drinks, a quarter of whom are between 14 and 25.

Many down the drinks on nights out in bars, clubs or concerts, but a lot of people also have them while exercising.

Earlier this month a French health watchdog ANSES advised a crackdown on energy drinks saying it was ill advised to drink them during a gym work-out or to mix them with alcoholic drinks.

Pregnant women and young people were also advised to avoid the drinks.

ANSES said it had received several reports of serious cardiovascular side-effects, and cited the death of a 16-year-old girl from cardiac arrest that was "very likely" due to her consumption of energy drinks.

Deputy Gerard Bapt, who penned the text of the new bill, claimed it was not motivated by potential revenues but to aimed at altering "behaviour".

However the UMP criticised the Socialist government for using taxes to deal with public health issues.

“There would be no limit to these types of taxes,” said the UMP’s Bernard Accoyer, who predicted the end of patisseries (cake shops), cigarette vendors and liquor stores if similar "health" taxes were adopted.

France already approved a tax on sugary drinks in December 2011 as part of the government's fight against obesity.France’s Health Minister Marisol Touraine said the government would also be cracking down on the advertising of energy drinks.

The proposed tax, which must be approved by the Senate and eventually the Conseil Constitutionel, will only target drinks that contain a minimum of 220 mg of caffeine per litre or 300 mg of taurine.