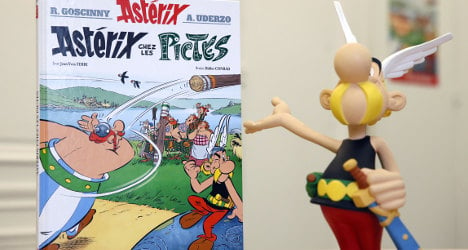 Five million copies of "Asterix and the Picts" – the 35th installment in a series that has become a publishing juggernaut – were released on Thursday in 15 countries and 23 languages, after months of anticipation.

The Gallic duo's latest adventures take them for the first time to ancient Scotland, with the new edition's cover depicting Obelix in full caber toss as a winking Asterix sits nearby.

Two million copies were printed for France and another three million for foreign audiences, including copies in Scots Gaelic.

The Asterix series – created by illustrator Albert Uderzo and writer Rene Goscinny in 1959 – is a bestseller in the comic book world, with 352 million copies sold worldwide and translations in more than 110 languages and dialects.

It features the adventures of an indomitable tribe of Gauls resisting Roman occupation, often with the help of a Druid-brewed magic potion that grants them superhuman strength.

The series has been adapted into four live-action films and is the inspiration for a popular theme park, Parc Asterix, outside Paris.

The latest edition is the work of writer Jean-Yves Ferri and artist Didier Conrad, and is the first not written and illustrated by one of the series' original creators.

Uderzo, who took over the writing when Goscinny died in 1977, announced in 2011 that he would no longer be drawing the series.

The 86-year-old did supervise production of the latest book however, and drew the Obelix featured on the cover.