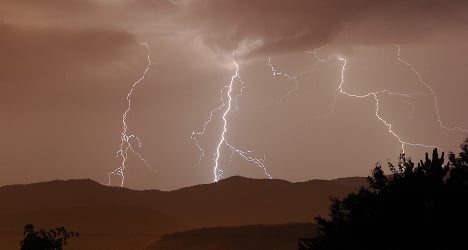 Homes were evacuated, electricity cut off and roads blocked in parts of south-eastern France on Wednesday as violent storms caused flooding in the department of Drôme. Photo: AFP

Some 150 homes were evacuated on Wednesday after a river burst its banks during violent storms in the Drôme department of the Rhône-Alpes region of south-eastern France.

Departmental roads were blocked and electricity cut off for some residents of the area, amid flooding.

This photo by France Bleu radio shows a car attempting to navigate through significant flooding in the Tain-l’Hermitage area of Drôme, where 1,300 people lost power.

Electricity provider ERDF has been working through the night to restore full service, according to Le Parisien.

In the town of Clérieux, 150 homes were evacuated after the river l’Herbasse burst its banks at three separate points. The residents were housed by the Red Cross overnight on Wednesday.

In nearby Curson, an agricultural building flooded, with the loss of 9,000 turkeys.