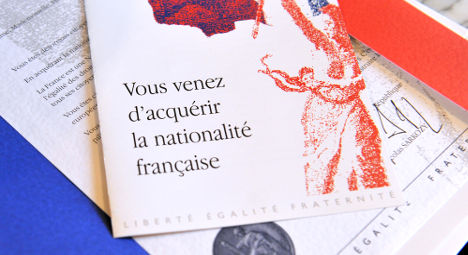 "You have just acquired French nationality" - but will children born in France lose their automatic right to become French? Photo: Alain Jocard/AFP

The UMP’s proposal to redefine France’s immigration laws was put forward by party leader Jean-François Copé and comes days after France was rocked by the scandal of 15-year-old Roma girl Leonarda Dibrani, who was deported to Kosovo during a school trip.

Copé said the bill, which will be presented to the French Parliament in 2014, is vital to stop France being so attractive to migrants.

“Is it normal for a child born in France to parents who are in France illegally can automatically become French? The answer is no,” Copé told France Inter radio.

The current rules around naturalization grant children born on France to foreign parents the right under law to gain French nationality once they turn 18, as long as they have lived in the country for at least five years from the age of 11.

In a move seen as a response to a surge in support for the far-right National Front (FN), Copé also backed qualifying periods of up to 10 years for some welfare benefits and the abolition of State Medical Aid (AME), a safety net that ensures doctors get paid for treating patients – notably asylum seekers – who are outside the country's social security system.

"France is being hit from one side by a rise in serious tensions between (ethnic minority) communities and from the other by the extreme right," Copé told AFP.

"Only the UMP can deliver a solution and we have to rewrite immigration policy completely.

"We are the most attractive country in Europe for migrants and that has to stop."

SEE ALSO : Ten reasons why you should become French "This is not the France we dream of"

The principle of automatic citizenship for everyone born in France – known as "le droit du sol" (the right of the soil) – is a cherished one for many in France, who see it as one of the cornerstones of the republic and the country's long history of providing a haven for refugees from all over the world.

Its abolition in 1993 by a centre-right administration was hugely controversial and the legislation was reversed five years later, so any child born in France to foreign parents automatically becomes a French citizen at 18 provided they have lived in the country for five of the previous seven years.

Demographic experts say that automatic citizenship for all French-born children makes little difference to overall population trends but the issue is a hugely symbolic one at a time when immigration is rising up the political agenda.

Copé's proposals were given short shrift by the Socialist government's Morocco-born spokeswoman Najat Vallaud-Belkacem, who accused the UMP leader of "seeking to reopen a pernicious debate on national identity."

She added: "The France that Jean-François Copé seems to dream about is one scrunched up in its own little corner. That's not the France we dream of, not the one we are building."

"Everyone can see this is just a mini-measure put forward by a man who could easily have implemented it when his party was in power for 10 years," Le Pen said.

Separately, the government announced on Wednesday an overhaul of France's asylum procedures, in the wake of a furore over the deportation to Kosovo of a Roma family that had spent several years living in France while battling to secure refugee status.

Supporters of the family argued that the length of time the children had spent in French schools should have resulted in them being allowed to stay.

Interior Minister Manuel Valls said the proposed reform would seek to bring average processing times down from 16 months currently to between six and nine months.

France had just under 50,000 asylum seekers as of January 1st, according tofigures from the UNHCR.