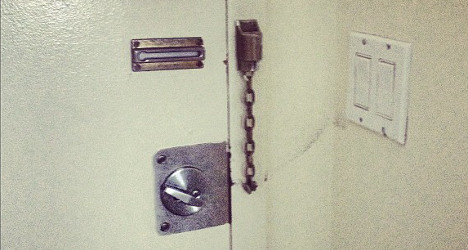 The new owner of an apartment near Paris has discovered the previous owner hanged inside the building, a whole eight years after his death. Unrelated file photo: Christopher Johnson

Thomas Ngin, a security guard, was found hanged in the apartment in Bussy-Saint-Georges near Paris, a full eight years after he ended his life, in 2005, according to Le Parisien.

Unbelievably, his flat was sold on at auction even while his body lay undiscovered inside.

Ngin, originally from Cambodia, who would have been 50 years old later this year, had been fired from his job, and was embroiled in legal proceedings against his employer at a labour court, according to reports.

He was also in hot water over an equity loan and household bills at the time of his suicide.

According to Le Parisien, Ngin had also cut off all contact with his two brothers and two sisters in the suburbs of Val d’Oise, on the other side of the French capital. He had previously been living with one of his brothers, but a severe rift provoked him to move to Bussy-Saint-Georges in 2001.

"He was extremely neat, and he couldn't tolerate his brother's habits," a source close to the case told Le Parisien.

Apparently overwhelmed by the stress, Ngin hanged himself on an unknown date in 2005, using a bedsheet.

While his body lay undiscovered, bills and letters piled up, including from the residents’ association of the apartment block, to whom he owed €14,000.

After years without a response from Ngin, in the end his bank seized his apartment and put it up for auction, where it was purchased for €415,000 on October 3rd this year.

The residents' association had voted in favour of Ngin's apartment being sold on, partly for the purpose of recouping the €14,000 from the auction.

Explaining how it was possible for Ngin's apartment to be seized and sold without contact from him or a visit to the property in question, a source familiar with the case told Le Parisien: "He would have received letters, but by definition this type of decision by a court doesn't require the consent or agreement of the individual concerned."

It was the property’s new owner who made the horrific discovery of Ngin’s corpse just days later on October 18th.

According to Le Parisien, his neighbours had knocked on his door, but when they got no response, eventually concluded Ngin had gone back to Cambodia.

A police source told TF1 television Ngin suffered from Obsessive Compulsive Disorder, and that his extreme cleanliness and heavy use of cleaning products might explain why neighbours weren't alerted by any odour coming from his home.

Furthermore, apartments in this particular complex are unusually isolated from one another, according to the same source.

Ngin’s family, for their part, had tried to reach out to him over the last eight years but, for the most tragic of reasons, to no avail.

An autopsy is expected in the coming days, in order to establish a more precise date of Ngin's death. Although it seems scarcely believable that  anyone could lie dead for eight years without being noticed, France has seen a series of similar cases in recent months.

In April, The Local reported how a 76-year-old woman lay dead in her home in the south-western city of Toulouse for three years, while bills and letters visibly piled up at her front door, before concerned neighbours finally alerted emergency services, who made the grim discovery.

During the summer, the new owner of an abandoned office building in Grenoble was shocked to discover the badly decomposed body of a man, apparently homeless, in a locked toilet. The deceased appeared to have died "months" before being found.

The number of French people afflicted by loneliness has grown in recent years, according to a survey reported by The Local in June.

Since 2010, the last time the survey was carried out, one million more French people are leading solitary lives, with an estimated five million, or 12 percent of the nation’s population aged over 18, now living without any social relations through family, friends, work or their community.

Odile de Laurens from the Fondation de France told The Local the modern way of life in France is contributing to the increase.

"In the past people lived their lives in the same place in the same circles. These days you have to build your own friends network, your own professional network and you need both to survive,” she said.

If you’re an expat in France experiencing financial troubles, family problems, or loneliness, read about SOS Help, or give their experienced listeners a call on 01 46 21 46 46 between the hours of 3pm and 11pm daily.

If you’re feeling depressed and think you may need to talk to a trained professional, CLICK HERE for a list of English-speaking therapists and counsellors in France.