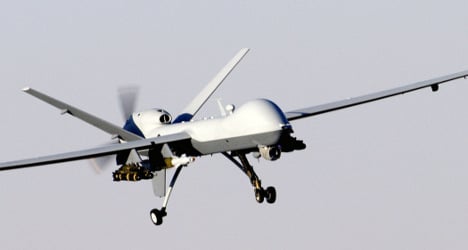 SNCF is testing drones to tackle thieves who have been pilfering copper cable from train tracks in France. Photo: Wikimedia commons

Thieves targeting cables on France's rail network have been prolific in recent months and forced operators SNCF and RFF to try to come up with a solution to the growing problem that is hitting them hard in the pocket.

RFF, which operators train tracks in France, has estimated the cost of the theft of cables at €30 million, and that’s without the knock-on cost of train services being disrupted.

With budgets tight, rail bosses have decided to turn to drones to identify and deter thieves. The aircraft offer a much cheaper method of thwarting criminals than the helicopter patrols undertaken currently.

According to Le Figaro, the drones can be purchased for around €3,000 each, whereas helicopters can cost up to €1,500 an hour to hire out.

The scheme is currently in its testing stage but rail bosses point to the fact that energy distributors ERDF have already made use of drones to keep tabs on their electrical network.

"This is a kind of small helicopter with no crew on board, with an embedded camera that has the ability to film either day or night ," SNCF’s Stéphane Volant, who is in charge of the project, told RTL radio.

Volant said the scheme would require the ability of the police to be able to react quickly on the ground if any thieves were spotted in the act.

“Where they will operate – whether on the TGV and TER lines and whether just at the busiest times of the year…I still need the necessary permits,” said Volant.

Sophie Brossard, who is charge of strategy and development at SNCF said moving from the testing stage to having drones in full use, will be “complex”.

“We must ask the aviation authorities (DGCA) to create aerial corridors to allow the drones to operate,” she told Le Figaro.

ERDF, a subsidiary of EDF, uses the drones to inspect networks in remote areas, mainly to keep tabs on any maintenance problems or faults.

The use of drones is becoming more widespread in France, with the aircraft being employed for a variety of reasons including by winemakers to monitor their crops as well as by pest control agents to spot hornets' nests.

Earlier this year The Local reported how one politician called on drones to be used to fight spiralling violence in the Mediterranean city of Marseille.