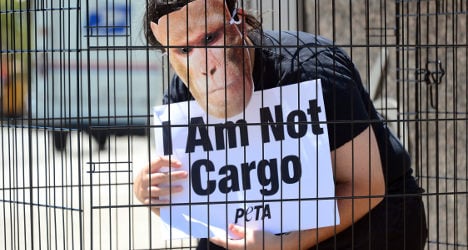 Air France released a statement on Tuesday saying it complies fully with international regulations governing the carriage of animals destined to be used for laboratory testing.

In its statement People for the Ethical Treatment of Animals (PETA) alleged the French airline is among only a few major carriers that still transport monkeys for use in lab experiments.

But in a response from its Paris head office, Air France said its cargo unit ensures the airline only works with laboratories whose biomedical research "is fully in line with current legislation and the regulations drawn up by scientific organizations specializing in animal welfare."

It added that it "visits all customers" to ensure that testing protocols conform with regulations, and that it monitors animal suppliers "who must comply with the breeding rules in force."

"If nothing authorizes an airline from ruling on the merits of using animals in biomedical research… then nothing authorizes it from refusing this type of transport in a perfectly legal way, with particular caution on the part of all those involved," it said.

Air France went on to quote a European Union directive from 2010 as saying that "the use of nonhuman primates in scientific procedures is necessary for biomedical research."

In January 2012, PETA claimed success in urging Air France to cancel a shipment of monkeys from Mauritius to a US laboratory, following a similar appeal to supporters.

This isn't the first time in recent weeks that Air France has ended up in a pickle due to its cargo. Last month, more than a tonne of cocaine, worth €200 million ($270 million), was transported on an Air France flight from Venezuela to France in 30 suitcases.

Venezuelan Justice Minister Miguel Rodriguez openly voiced his suspicion that employees of the airline had been involved in the drug-smuggling.

"How can the cocaine shipment reach France and it gets taken out without going through the normal controls?" he asked.