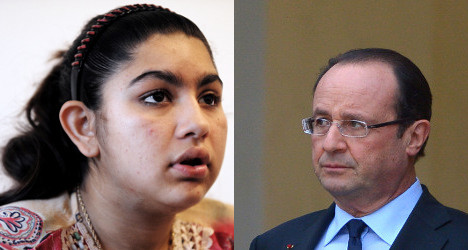 French President Francois Hollande has been attacked from all sides for offering a deported Roma schoolgirl the chance to return to France without her family, ceding ever more ground to his ambitious Interior Minister Manuel Valls.

Hollande's offer to let Leonarda Dibrani, 15, come back to the country – which she declined, saying she would not leave behind her parents and five siblings in Kosovo – has been met with incomprehension and vitriol, leaving the president accused of misusing his position and acting "emotionally".

French media on Sunday let rip at Hollande, with the website of the left-wing Libération newspaper describing the move as "the most improbable of all scenarios", and the weekly Journal du Dimanche calling it "as bizarre as it is incomprehensible".

Catholic journal La Croix, for its part rounded on Hollande, calling the move "neither here nor there" and "amateurish," while right-leaning Le Figaro dubbed the whole episode a "shipwreck" for the president.

Politician Francois Bayrou, a centrist heavyweight who backed Hollande in the second round of presidential elections in 2012, weighed in to say a head of state "should not confuse emotion and the duty of government."

IN-DEPTH: How a Roma girl became a 'symbol' in France

The Roma teenager immediately turned down Hollande's offer from the town of Mitrovica in Kosovo, where she has been living with her family since their October 9th deportation.

"I'm not the only one who has to go to school, there are also my brothers and sisters," she said, adding, "[To return] without my family would be death."

"Mr. Hollande has no heart, no pity. He doesn't understand my situation," she said.

The family were assaulted on Sunday in what local authorities described as a private dispute with another family that was unrelated to their deportation from France.

The girl's mother was briefly hospitalised and released as her injuries were not serious, police said, adding that four people have been detained.

Leonarda's arrest by French police during a school trip and the subsequent deportation of her family has aroused soul-searching by France's left and brought thousands of high-school students to the streets in protest.

The results of a formal investigation published Saturday found that the deportation was lawful but that police could have used better judgement in the way they handled it.

However, the case was further complicated by revelations that Leonarda's father had lied about his family's origins to have a better chance at obtaining asylum. As an advocate of the rigorous enforcement of immigration laws, Socialist Interior Minister Valls was put in a difficult position when his boss made the grand gesture.

Initially praising an "act of generosity" in an interview with the Journal du Dimanche, Valls went on to say that the family's deportation was justified by seven prior asylum rejections and the "fraudulent documents" they provided in support.

But in a deft manoeuvre seemingly designed to distance himself from the president, Valls said "emotion cannot be the guide (in deciding) a policy."

He then paid tribute to France as a "land of immigration", but nonetheless stressed the need to "control the flow" of foreigners entering the country.

Last month, Spanish-born Valls triggered an outcry when he said most of the 20,000 Roma in France had no intention of integrating and should be sent back to their countries of origin.

But a survey by polling firm BVA published on Saturday in the Le Parisien daily showed that 74 percent of the French approved Valls's position on the Dibrani controversy.

Hollande's own approval ratings are dismal, slumping to a new low of just 23 percent, according to a poll published Sunday in the JDD.