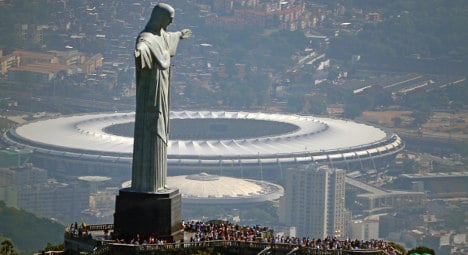 Who will stand in the way of France's path to Brazil 2014? The World Cup play off draw takes place at 3pm Paris time on Monday. Photo: Vanderlei Almeida / AFP

UPDATE: France to face Ukraine in World Cup play offs. Click here for the results of the draw.

Deschamps has publicly expressed his annoyance that France missed out on being seeded and as a result are in danger of being pitted against Cristiano Ronaldo's Portugal, Euro 2004 winners Greece, Croatia or Ukraine in the draw at FIFA'S Zurich headquarters.

Joining the French in the unseeded 'pot' are the Zlatan Ibrahimovic-inspired Sweden, Romania and surprise packet Iceland.

Deschamps, asked which team he wanted to avoid, said: "It's legitimate to say Portugal because they have Cristiano Ronaldo, who's a great player and a big influence.

"But playing Greece, Croatia or Ukraine, they're more based round teamwork but not easier or simpler to play."

He was speaking after France's closing victory over Finland with his side already assured of the runners-up spot in Group I behind world champions Spain.

Deschamps will be counting on his side sealing their Brazil berth in less controversial fashion than they did their ticket to South Africa.

France owed their appearance at what was to prove a disastrous 2010 World Cup to a play-off success over the Republic of Ireland, with a little help from Thierry Henry's hand.

Henry admitted to deliberately handling the ball to set up William Gallas's decisive goal to seal France's presence in South Africa, as shown in this video.

France's build up to the all important play-off match has been hit by controversy after left back Patrice Evra slammed French TV pundits, including French World Cup winner Bicente Lizarazu for being "parasites" and "tramps".

"There are some pundits with whom I will soon settle my differences with them… they want to sell a lie to the French people that Evra is disliked. But that is not the case at all.

"Him I don't even know if he was ever voted best left-back in the world.

"I recall my first call-up to the national side, all the others shook my hand apart from him. Thierry Henry said to him 'Oh Liza, here is the opposition'. And Lizarazu looked at me and said 'Why? Someone told you that I was already retired?'

"People have a good impression of me, it won't be these tramps who dirty my image. They must stop lying to the French people," said the Senegal-born defender, who then classed them as parasites.

Evra has since been summoned  to explain his comments to the French FA. Bosnia-Herzegovina, who made no mistake this time round qualifying by right.

Manager Paulo Bento will be relieved at the return of star striker Ronaldo, who missed out on his country's final 3-0 win over Luxembourg which sealed the runners-up spot in Group F behind Russia.

Like Portugal Sweden go into Monday's draw secure in the knowledge that talismanic leader Ibrahimovic is back after being suspended for last week's 5-3 loss to Germany.

The Paris Saint-Germain forward said after that game: "I am not worried. In the play-offs we will have two completely different games.

"I liked the way the team fought. If I had been on the pitch, it would have been the same result.

"There are some good teams in the pot, but we will do all we can to realise our dream of going to the World Cup."

Croatia go into Monday's lottery with a new man at the helm after running out of steam with defeats in their final two qualifiers.

Coach Igor Stimac paid the price after offering to stand down in the wake of last week's 2-0 loss to Scotland, which came four days after a 2-1 home defeat to Group winners Belgium.

Iceland, one of the revelations of the eurozone qualifiers, secured their place in their first-ever play-offs, with a closing 1-1 draw with Norway to finish as Group E runners-up behind Switzerland.

Are France right to fear Portugal more than the other teams they could face?