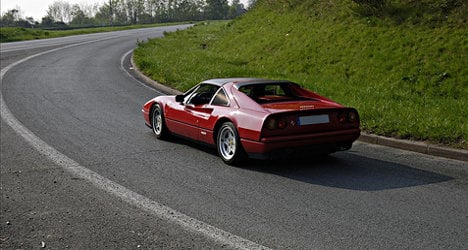 Any sports car collector would be devastated to see their prized Ferrari in a wreck, but that was the fate that befell not just one but four owners of the vehicles after a spectacular pile up on a French country road at the weekend.

Thankfully no one one was injured in the crash near the village of Fraysse,on the road to Millau, in the Tarn region of southern France on Sunday morning.

However, the four car collectors might see their insurance costs go through roof after the cars piled into one another as they approached roadworks.

According to local newspaper La Depeche, the car enthusiasts had taken their Ferraris for a run out on the Sunday, during which they planned to visit “les Caves de Roquefort”, where the famous cheese is made, as well the village of Millau.

The four Ferraris were all travelling in convoy and had just passed a notorious speed camera called the “The White Cross”, where the speed limit is 70 km/h.

According to initial reports, the lead car was taken by surprise by a sign indicating there were some works ahead on the road and a speed bump had been installed.

The driver is believed to have slammed his foot on the brakes too sharply, causing the cars behind him to pile up, one after another, in a concertina effect.

Firefighters were called to help rescue three of the drivers who were trapped in their cars. They suffered no serious injury but were shaken up by the incident.

The Millau road was closed for two hours as debris was cleared up and the mashed up vehicles were towed away.