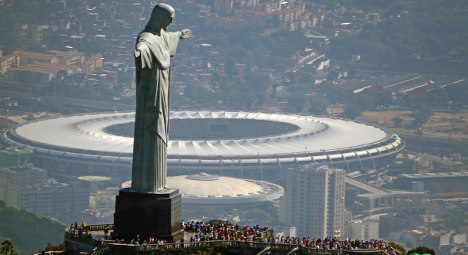 Continental giants Portugal and Sweden were drawn together in the pick of the World Cup qualifying play-offs in Europe made by football's governing body FIFA on Monday.

Former champions France were given a favourable pairing as they travel to Ukraine for the first leg on November 15 while Greece will host Romania and Croatia play their first leg in Iceland.

Former World Cup semi-finalists Portugal and Sweden were the first two countries pulled out of the hat as Cristiano Ronaldo will defy Zlatan Ibrahimovic in what will be a battle of star-studded line-ups.

Didier Deschamps' French side, who were narrowly beaten to top spot in their pool by defending champions Spain, travel to the Euro 2012 co-hosts where they defeated Ukraine 2-0 in group play

"We were not seeded and could have played Portugal or Croatia who have a long history, but Ukraine is not a simple draw either," Deschamps told Eurosport tv.

"They are on a run of seven matches without defeat and they concede very few goals as well as a long trip over there," he continued.

"It's good to have the return leg at home but one team will qualify and the other will be staying home for the World Cup.

"We have to have a lot of confidence and respect the opposition," added the 1998 World Cup winning captain.

The return leg will be played on November 19.

Ukraine's key player Artem Fedetsky of Dnepropetrovsk believes in his side's chances despite a tough draw.

"We've already been buried after the poor start in the qualifying campaign.

"However, we managed to come back and reach the play-off stage. After that every single match for us was like the final, like a do-or-die mission.

"Now we have serious experience of playing the most important matches. We are a cohesive team now and, I believe, we have fair chances to go through," he added.

Deschamps will be counting on his side sealing their Brazil berth in less controversial fashion than they did their ticket to South Africa.

France owed their appearance at what was to prove a disastrous 2010 World Cup to a play-off success over the Republic of Ireland, with a little help from Thierry Henry's hand.

Henry admitted to deliberately handling the ball to set up William Gallas's decisive goal to seal France's presence in South Africa, as shown in this video.

France's build up to the all important play-off match has been hit by controversy after left back Patrice Evra slammed French TV pundits, including French World Cup winner Bicente Lizarazu for being "parasites" and "tramps".

"There are some pundits with whom I will soon settle my differences with them… they want to sell a lie to the French people that Evra is disliked. But that is not the case at all.

"Him I don't even know if he was ever voted best left-back in the world.

"I recall my first call-up to the national side, all the others shook my hand apart from him. Thierry Henry said to him 'Oh Liza, here is the opposition'. And Lizarazu looked at me and said 'Why? Someone told you that I was already retired?'

"People have a good impression of me, it won't be these tramps who dirty my image. They must stop lying to the French people," said the Senegal-born defender, who then classed them as parasites.

Evra has since been summoned  to explain his comments to the French FA.

Romania are bidding to return to the final stages for the first time since 1998 and will fancy their chances against goal-shy Greece, who were beaten to top spot in their pool by Bosnia-Herzegovina.

Finally, Iceland look to qualify for the first time in their history against a Croatia side coming off back to back defeats against Scotland and in the midst of a managerial change.

The four winners will qualify for the 2014 World Cup in Brazil from June 12 to July 13.

The draw for the eight groups of four that will feature in the first round of the tournament will take place on December 6 in Bahia, Brazil.