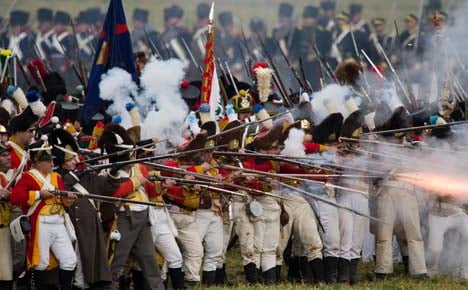 French troops fighting for Napoleon's Grande Armee fire their weapons during a re-enactement of the Battle of the Nations in Leipzig, eastern Germany. AFP Photo / John Macdougall

Fifes and drums played in the background as men in the brilliant green, red, light blue and grey uniforms worn by Napoleon's army tended to their cannons and muskets.

A historical commission spent years perfecting the scenario for the bicentennial re-enactment, and some 6,000 enthusiasts turned out to stage the Battle of the Nations, also known as the Battle of Leipzig.

"I want to show the history for our young people," said re-enactor Peter Bach, 59. "Otherwise they could only read about it in the history books."

Bach, from nearby Erfurt, is playing a two-star general in the service of the Duke of Saxony. The gold-braid trim on his uniform and his feathered, two-corner hat attests to a certain status on the battlefield.

Ahead of the re-enactment, however, he had no idea where his unit would be moving.

"We want it to be like reality, so I wait to get my orders from the big chief," Bach said, happy to be kept in the dark.

Fighting for Napoleon's army, though, one thing is certain: "In the evening, we are all in heaven," Bach said. "It's no problem, though, we are all friends."

Weakened from a campaign through Russia, Napoleon suffered a decisive defeat here in 1813 at the hands of allied forces including Prussia, Russia, Sweden and Britain.

The battle is known as the bloodiest in Europe before World War I, claiming one in six of the 600,000 troops who were mobilised.

On Sunday, re-enactors from 28 countries were on the field. In drills ahead of the event, orders were barked above the din in a host of languages.

"The winks and nods are helpful," said Robert Smith, 41, an American whose English-speaking unit was getting its marching orders in Polish. Smith translated orders for his unit, while also relying on the international language of hand gestures and head nods to tell his men where to go.

"There are six languages in this battalion," said Mark Koens, like Smith clad in a Prussian-blue coat and grey wool trousers.

Koens, 43, travelled from faraway Sydney with a handful of other Australians. He was drawn to re-creating the Napoleonic wars because so many veterans emigrated to Australia after the fighting, settling there and shaping the infant land.

"It changed the Australian landscape," Koens said. "Areas are named after battles: towns, streets, pubs (such as) Lord Nelson, Hero of Waterloo."

Both Koens and Bach say the best part of such an event is spending time with a veritable United Nations of re-enactors in the evenings leading up to battle.

"Mostly it's about the camp, cooking, singing, sewing, everyday activities," Koens said. "Nations that were once at war come together to share and commemorate about that loss, which is great."