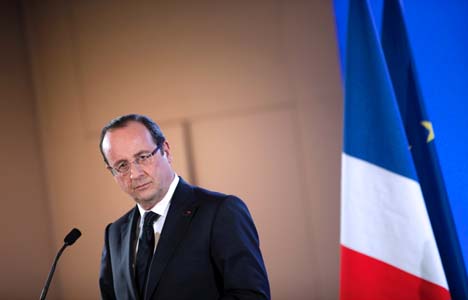 Leonarda Dibrani's eviction has caused an outcry in France, sending droves of angry high school students to the streets this week and placing popular interior minister Manuel Valls under a hailstorm of criticism.

Much of the anger surrounding the 15-year-old has focused on how she was forced off a bus full of classmates during a school outing earlier this month,
before she was deported with her family to Kosovo.

"If she makes a request, and if she wants to continue her studies, she will be given a welcome, but only her," Hollande said live on television, in his first remarks on an affair that burst into the limelight on Wednesday.

A probe into the deportation published Saturday found that it was lawful, but that police could have used better judgment in the way they handled it.

Dibrani herself turned down Hollande's offer, speaking from the town of Mitrovica in Kosovo where she has been living with her family since their deportation on October 9 from the eastern French town of Levier.

"I will not go alone to France, I will not abandon my family. I'm not the only one who has to go to school, there are also my brothers and sisters," she said.

Her father Resat, 47, added that the family would not be divided and would return to France by any means.

"My children were integrated in France, we continue to fight as my children are strangers here (Kosovo)", he said.

Dibrani, her parents and five brothers and sisters had lived in France for four years while their asylum bid was processed. It was eventually rejected in the summer.

The ministry probe found that police had gone to the family home in the morning of October 9 to deport all members, but found the teenager had slept at a friend's house to go on the outing.

French law bans any intervention on youngsters while they are at or near school. The report found that while the bus was nowhere near Dibrani's school, police did not realise "what was at stake with interrupting this outing" and "did not demonstrate the necessary discernment."

In his televised appearance, Hollande said that from now on, any such intervention would be banned during school hours.

The probe result is a boost for Valls, whose popularity far exceeds that of his boss Hollande but who was under intense scrutiny over the deportation.

A survey by polling firm BVA published on Saturday in the Le Parisien daily showed that 74 percent of the French approve Valls' position.

While a majority of people in the survey — which polled a representative sample of 1,090 people aged 18 and above — said they were shocked by Leonarda's detention, 65 percent were against the schoolgirl and her family returning to France.

Students taking part in protests in Paris and other cities on Thursday and Friday, however, had demanded that Dibrani and another deported pupil Khatchik Kachatryan be allowed to return to France to continue their studies.

But the case has been further complicated by revelations that Dibrani's father had lied about his family's Kosovo origins to have a better chance to obtain asylum.
In an interview with AFP Thursday, Resat said only he had been born in Kosovo and that his wife and five of his six children, including Leonarda, were born in Italy.

The probe also found that Leonarda and her sister were taken in by French social services after having accused their father of violence — a claim they later retracted.
The controversy follows an outcry last month over remarks by Valls in which he said most of the 20,000 Roma in France had no intention of integrating and should be sent back to their countries of origin.

But deportations of young, school students are always a particularly sensitive issue.

By law, a minor on his or her own cannot be deported, and students are only evicted from France after they come of age or if their parents are also sent away.