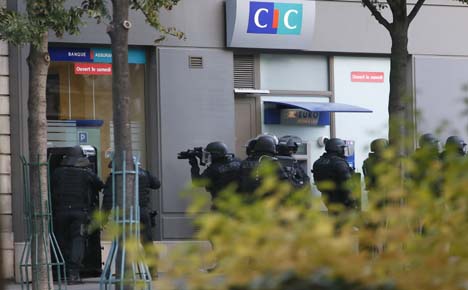 French police stand outside a CIC bank while an armed man holds people hostage inside in Paris on October 18, 2013. AFP Photo / Patrick Kovarik

"He gave himself up after negotiations," releasing a final female hostage he had kept after giving up three others, a police source said.

The gunman entered the branch of CIC bank in Paris's southern 13th district, barely 200 yards from the area's main police station, around 1450 GMT.

He took three women and a man hostage but quickly released two of the women and, 90 minutes later, released the man. He freed the fourth hostage at 1700
GMT.

After giving himself up, the man emerged from the bank with his hands on his head and was placed under formal detention.

The head of the Paris criminal police department, Christian Flaesch, said the hostage-taker was "known to police and mental health officials" in the area.

He said the man had entered the bank with a handgun and a tear gas cannister.

One of the bank's employees managed to trigger an alarm shortly after the man entered the building.

Police had cordoned off the area, blocking traffic, setting up a perimeter and putting snipers on nearby rooftops.

The man was informed by the police negotiator during the brief hostage-taking that his demand for social housing "was being very closely examined" by the authorities.